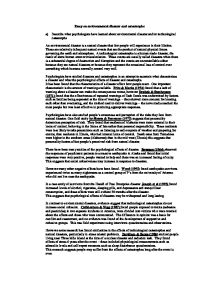 Describe what psychologists have learned about environmental disaster and/or technological catastrophe.

Essay on environmental disaster and catastrophe a) Describe what psychologists have learned about environmental disaster and/or technological catastrophe An environmental disaster is a natural disaster that few people will experience in their lifetime. These are relatively infrequent natural events that are the product of natural physical forces governing the earth and atmosphere. A technological catastrophe is a human made disaster, the result of some human error or miscalculation. These events are usually called disasters when there is a substantial degree of destruction and disruption and the events are uncontrollable either because they are natural disasters or because they represent the occasional loss of control over something which humans normally control very well. Psychologists have studied disasters and catastrophes in an attempt to ascertain what characterises a disaster and what the psychological effects of disaster and catastrophe. It has been found that the characteristics of a disaster effect how people react. One important characteristic is the amount of warning available. Fritz & Marks (1954) found that a lack of warning about a disaster can make the consequences worse, however Drabek & Stephenson (1971) found that the effectiveness of repeated warnings of flash floods was undermined by factors such as families being separated at the time of warnings - they showed more concern for locating each other than evacuating, and the method used to deliver warnings - the news media reached the most people but was least effective in producing appropriate responses. Psychologists have also studied people's awareness and perception of the risks they face from natural disaster. ...read more.

used interviews, questionnaires and observations to try to measure social cohesiveness in two communities where technological catastrophes had occurred. These measurements may lack validity, which is being sure that a measurement actually does measure the variable it claims to measure, and reliability, which means the measurement being reliable over time, since the methods used may suffer from problems of social desirability responses and observer bias. In COMPARISON the measurements used by Simms & Baumann were personality based questionnaires and interviews, and these may also lack validity and reliability, as these researchers used these measurements as an indication of perceived risk from natural disaster. In CONTRAST Davidson & Baum (1986) used a range of both physiological and self-report measures of stress, and these measurements were high in validity and reliability. The third evaluation issue is ethnocentrism, which means applying the norms found in one culture to the whole of the world. A great deal of research in disasters and catastrophes has been carried out in America and Europe, western cultures. For example Simms & Baumann's research was carried out in Illinois and Alabama, but these researchers used their results to make generalisations about personality and perception of risk from disaster. In COMPARISON Bowman's research with psychiatric patients was carried out in Alaska, however Bowman also made generalisations about social cohesiveness in responses to disasters. It could be argued that in some cultures collectivism is already much greater than in western cultures that tend to be more individualistic, and therefore this research may be of little use in predicting responses to disaster globally. ...read more.

but may decrease after technological disasters (Cuthbertson & Nigg 1987). It could therefore be suggested that in areas at risk of natural disaster people prepare by forming help groups which would be ready to provide assistance in the event of a disaster. This would then help capitalise on the immediate feelings of wanting to help which appear to be shown after a disaster. In the case of technological disaster it could be a good idea to provide information sessions for people living in risk areas or those who have been affected and advice lines and help groups set up in communities at risk or affected. This may help negate the effects found in research by Cuthbertson & Nigg, and in addition Sjoberg (1991) found that the more knowledge people had about exposure to toxins the less their perceived risk. Once a disaster or catastrophe has occurred research shows that those affected will need support for stress related problems and psychological disorders such as sleep disturbance and nightmares, (Wood 1992; Davidson & Baum 1986) therefore in known risk areas it may be advisable to train members of those communities in counselling skills in order to ensure a resource base for coping with any event. This would also be supported by a theoretical explanation of the effects of disasters, particularly stress, which argues that the extent to which people are able to conserve resources will determine the amount of stress suffered after a disaster (Hobfoll 1989) It can be seen that psychological research has contributed extensively to an understanding of the effects of disaster and catastrophe and measures which can be taken to minimise these effects. ...read more.