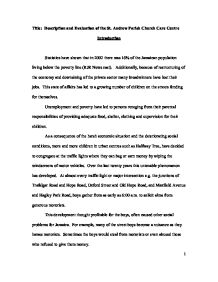 Title: Description and Evaluation of the St. Andrew Parish Church Care Centre Introduction Statistics have shown that in 2002 there was 16% of the Jamaican population living below the poverty line (RJR News cast). Additionally, because of restructuring of the economy and downsizing of the private sector many breadwinners have lost their jobs. This state of affairs has led to a growing number of children on the streets fending for themselves. Unemployment and poverty have led to persons reneging from their parental responsibilities of providing adequate food, shelter, clothing and supervision for their children. As a consequence of the harsh economic situation and the deteriorating social conditions, more and more children in urban centres such as Halfway Tree, have decided to congregate at the traffic lights where they can beg or earn money by wiping the windscreens of motor vehicles. Over the last twenty years this untenable phenomenon has developed. At almost every traffic light or major intersection e.g. the junctions of Trafalgar Road and Hope Road, Oxford Street and Old Hope Road, and Maxfield Avenue and Hagley Park Road, boys gather from as early as 6:00 a.m. to solicit alms from generous motorists. This development thought profitable for the boys, often caused other social problems for Jamaica. For example, many of the street boys become a nuisance as they harass motorists. Sometimes the boys would steal from motorists or even abused those who refused to give them money. Many of the boys actually live on the streets where it is reported that they become involved in pushing and taking illegal drugs. It has been reported that some are molested by homosexuals and often they are beaten up. The most unfortunate situation which has befallen the street boys is the lack of education. Very few if any of these boys who beg at the nation's traffic lights can ever hope to become useful and productive adults without formal education and training. ...read more.

According to information obtained from one of the founding members, the Rev. Shawn Major-Campbell who was the curate of the parish church started the project. He is now stationed in the Cayman Islands. It was conceived because Rev. Shawn Major-Campbell saw the need to help boys who spent most of their time unsupervised on the streets and in the community. Rev. Shawn Major-Campbell saw the need to establish a church-based organisation to provide these boys with opportunities to become useful citizens rather than criminals. He got a group of church members and started the project in the old courthouse that is adjacent to the St. Andrew Parish Church. This work started in 1997 with the assistance of the Lions Club. At the initial stage, the boys were provided with meals and were taught manners and other social skills by Inspector Thomas from the Community Relations Division of the Jamaica Constabulary Force. Aims and Objectives of the Care Centre The aims and objectives of the St. Andrew Parish Church Care Centre are: > To resocialise the boys > Provide opportunities so that they can be reintegrated into mainstream society. The centre tried gallantly to transform the street boys by soliciting assistance from government and the private sector. The Centre's task was very difficult because of (a) the waywardness of the boys (b) the boys' low self esteem (c) the boys' low educational achievement and (d) the need for financial resources. As time progressed, some of the boys were sponsored and sent to the Y.M.C.A and other schools, where hey were provided with basic academic training. Many of the street boys could not and still cannot read and write well. Hence the academic programmes had to be geared towards remedial reading, writing and arithmetic. Additionally, the boys had to be taught to control their aggression and bad behaviour. They needed a total "make over" in order to get them to an acceptable standard of good citizenship. ...read more.

This can be verified by visiting all the major centres where there are traffic lights and informal car washing establishments. Many of the street boys also visit betting shops in an attempt to beg or place bets hopefully to make some money. Professor Aubrey Phillips writing in Adolescents in Jamaica (1993) argued that the teenagers were in trouble because of the adverse socio economic conditions facing them and their parents. For too many have to grow-up in substandard living accommodation and they also lack sufficient nutrition. Being of poor parents, many of these youngsters have to go on the streets to sell newspapers, push carts, wash cars, wipe windscreens of vehicles, beg and steal to make a quick dollar. Some take the money home to their parents, but the majority of them live on the street. They eventually become juvenile delinquents. Many of these young people do end up before the courts of the land. Burrowes 1973 showed that between 1977 and 1981 there were 3,475 boys who were taken before the courts for various offences. It therefore follows that if something more is not done to arrest the problem of street children, the problem will get worse and the nation will soon have no place to put them when they get into trouble with the police. The researcher further recommends that the Centre established a medial unit to cater to the medical needs of the street boys. In this unit, the boys would be given various psychological and psychiatric tests to probe their mental heath and stability. Where there are early signs of illness, they should be treated free of cost. Finally, Jamaica needs to introduce the Borstal System to take care of teenagers who are difficult to be managed. The Americans have established Tranquillity Bay here to take care of their juvenile delinquents. Why can't we do the same for our own street boys if their behaviour cannot be changed in more civilised ways. The Anglican Church must be commended for its vision and dedication to the upliftment of the street boys. 1 ...read more.