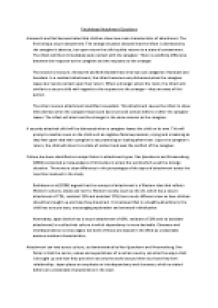 This means that a lot of time is spent with the parents which can result in a secure attachment type. This technique is not specific to western cultures, in Japan and China the children stay with their primary caregiver (in Japan due to the culture and China due to lack of money or no available day care). China also has a single child policy so from this it means the only child gets the most attention from its parents. The strange situation is a method devised by Ainsworth and Bell to measure the type of attachment that a child has formed. The experiment is setup in a small room with one way mirror so the behaviour of the child can be observed. Children who were involved ranged from 12 to 18 months old and were citizens on the USA. The method contains 8 stages in which the experimenters observe a child?s behaviour. This is briefly what happens: Parent and infant are introduced to the experimental room. Parent and infant are alone. Parent does not participate while infant explores. Stranger enters, converses with parent, then approaches infant. Parent leaves inconspicuously. First separation episode: Stranger's behaviour is geared to that of infant. First reunion episode: Parent greets and comforts infant, then leaves again. ...read more.

and is imposed it on the rest of the world. The strange situation also seems to exaggerate behaviours. Children over-react when placed in the strange situation so do not behave as they would normally in the real world. Finally Ainsworth is criticised for over-simplification in her belief that children can be categorised into only three groups. Other studies have suggested that there big individual differences between children within in attachment group. Main suggested that a fourth category, ?Disorganised? should be introduced as some children did not show any clear cut behaviours from one specific group or behaved differently each time. The strange situation was constructed and carried out primarily in the US. This means it is culturally biased and has the US idea of what is right and not embedded in it ? secure attachment and the values associated with it being the best. This means that you cannot apply it to other cultures (despite them doing so) as it does not have other cultures and perspectives in mind. The experiment was observed by a group of people who wrote down what they saw. From this it can be questioned, what was definitely characteristic behaviour of one attachment type? It falls down to each individual observing the child to what behaviour they see, and as it is personal opinion it may result in misinterpreting the behaviour or incorrectly labelling it as an attachment that it might not actually be. ...read more.