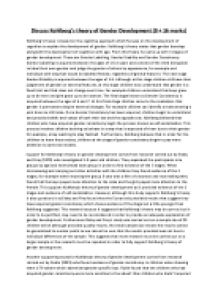 Transfer-Encoding: chunked ﻿Discuss Kohlberg?s theory of Gender Development (8 + 16 marks) Kohlberg?s theory is based on the cognitive approach which focuses on the development of cognition to explain the development of gender. Kohlberg?s theory states that gender develops along with the development of cognition with age. From this theory he came up with 3 stages of gender development. These are Gender Labelling, Gender Stability and Gender Consistency. Gender Labelling is acquired between the ages of 1.5-2 years and consists of the child being able to label their own gender and judge the gender of others by appearance, for example and individual with long hair would be labelled female, regardless of genital features. The next stage Gender Stability is acquired between the ages of 3-5. Although at this stage children still base their judgement of gender on external features, at this stage children now understand that gender is a fixed trait and that does not change over time. For example children understand that boys grow up to be men and girls grow up to be woman. ...read more.

When interviewing and carrying out other activities with the children they found evidence of the 3 stages, for example when showing the group 5 year olds a film of a woman and man talking they found that the boys payed more attention to the male and the girls payed more attention to the female. This supports Kohlberg?s theory of gender development as it provided evidence of the 3 stages and evidence of self-socialisation. However, although this study supports Kohlberg?s theory it also questions it as Slaby and Frey found that the 5 year olds provided results that suggest they have acquired gender consistency which shows evidence of the stage but a little younger than Kohlberg suggested. This matters because it suggests that Kohlberg?s theory may be correct but in order to be justified, may need to be reconsidered in order to provide an adequate explanation of gender development. Furthermore Slaby and Frey?s study was carried out on a sample size of 55 children which although provided quality results, the small sample size means the results cannot be generalised to a wider public as we cannot be sure that the results provided was not due to individual differences of the sample. ...read more.

As although the children we more sensitive to their sex specific toys we cannot be sure that this was only due to their desire to fulfil their gender role, as their influence may have also be due to their personal like or dislike for the toy, for example a boy not showing interest in the advert specific for girls may not be due to the gender stereotype but may be due to the boy not liking the toy presented. This matters because although it supports Kohlberg?s theory of gender development, the also suggests that more research into self-socialisation must be carried out in order to fully support Kohlberg?s theory on gender development. In conclusion, Kohlberg?s theory provides a logical explanation for gender that has been supported in many studies and has been seen across different cultures such as research carried out by Munroe et al however this theory fails to consider other factors such as social influences. For example, Kohlberg does not consider the role or parents or peers in gender development. Kohlberg furthermore underestimates the ages for each stage in his theory. This suggests that Kohlberg?s theory must be revised in order to provide an accepted explanation for gender development ...read more.