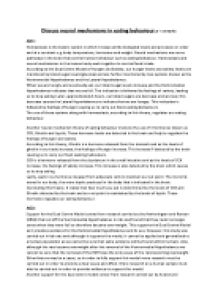 Transfer-Encoding: chunked ﻿Discuss neural mechanisms in eating behaviour (8 + 16 marks) AO1: Homeostasis is the body?s system in which it keeps all the biological levels and processes in order and at a constant e.g. body temperature, hormones and weight. Neural mechanisms are nerve pathways in the brain that control human behaviour such as eating behaviour. Homeostasis and neural mechanisms in the human body work together to control food intake. According to the Dual Centre Model of Hunger and Satiety, our hunger levels and satiety levels are monitored by blood sugar levels (glucose) and are further monitored by two systems known as the Ventromedial Hypothalamus and the Lateral Hypothalamus. When we are hungry and eventually eat, our blood sugar levels increase and the Ventromedial Hypothalamus indicates that we are full. This indication is followed by feelings of satiety, leading us to stop eating. Later, approximately 4 hours, our blood sugars are decrease and are low; this decrease causes the Lateral Hypothalamus to indicate that we are hungry. ...read more.

However, this study was carried out in lab rats and although it supports the model, it cannot be applied and generalised to a human population as we cannot be sure that same evidence will be found within humans. Also, although the rats became overweight after the removal of the Ventromedial Hypothalamus we cannot be sure that the removal of the VMH was the only cause of the rats becoming overweight. Other factors may be a cause, so in order to fully support this model more research must be carried out in order to provide a clear cause and effect. More research on a human sample must also be carried out in order to provide evidence to support this model. Another support for the dual centre model comes from research carried out by Anand and Brobeck (1957) who researched damage to the Lateral Hypothalamus in rats and found that the rats could no longer sense when they were hungry resulting in them eating less as according to the Dual Centre Model, damage to the Lateral Hypothalamus results in the body no longer being able to indicate hunger. ...read more.

Cummings research 6 patients and found that 5 out of 6 patients requested their evening meal when ghrelin levels were high. This supports the role of ghrelin in eating behaviour as it provides evidence of its affects in both humans and animals. However the results found was correlational therefore a clear cause and effect cannot be established. These results may have also been found due to other factors such as environmental factors that play a role in hunger. Also due to the complications of this study, only 6 participants were used and they were all male. Therefore although the research supports the theory, this evidence cannot be generalised to an entire population and females. This suggests more research must be carried out on the role of Ghrelin to wholly support this theory. In conclusion, both neural mechanism theories into eating behaviour takes a clear biological approach resulting in the theories being reductionist as these theories over simplify a complicated process. These theories ignore the psychological and social factors involved in influencing eating behaviours, such as cultural influences. This suggests a theory that considers both biological and psychological factors would be more suitable. ...read more.