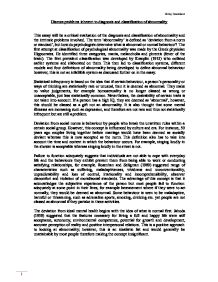 Discuss problems inherent to diagnosis and classification of abnormality

Discuss problems inherent to diagnosis and classification of abnormality This essay will be a critical evaluation of the diagnosis and classification of abnormality and the intrinsic problems involved. The term 'abnormality' is defined as 'deviation from a norm or standard', but how do psychologists determine what is abnormal or normal behaviour? The first attempt at classification of psychological abnormality was made by the Greek physician Hippocrates. He identified three categories, mania, melancholia and phrentis (fever of the brain). The first prevalent classification was developed by Kraeplin (1913) who collated earlier systems and elaborated on them. This then led to classification systems, different models and four definitions of abnormality being developed to define abnormal behaviour however, this is not an infallible system as discussed further on in the essay. Statistical infrequency is based on the idea that if certain behaviour, a person's personality or ways of thinking are statistically rare or unusual, then it is deemed as abnormal. They make no value judgements, for example homosexuality is no longer classed as wrong or unacceptable, just less statistically common. Nevertheless, the desirability of certain traits is not taken into account. If a person has a high IQ, they are deemed as 'abnormal', however, this should be classed as a gift not an abnormality. ...read more.

The individual must also exhibit behavioural, psychological or biological dysfunction. As the DSM IV has been mainly influenced by psychiatrists, the system tends to be more consistent with the medical perspective; therefore diagnosing a psychological disorder only describes the symptoms and not the origins. As classification becomes more complex, more patients are being diagnosed with more than one disorder (Kessler et. al. 1994). No classification scheme is flawless and no two people with the same diagnosis will behave in the same way. This is illustrated by a study by Rosenhan (1973) whereby eight 'pseudo patients' were sent to different psychiatric hospitals where they claimed they could hear voices saying 'thud' hollow' and 'empty'. All were admitted with the majority being diagnosed with schizophrenia. Shortly after admission they stopped claiming that they could hear voices and all were eventually discharged after varying lengths of stay, with the diagnosis of 'schizophrenia in remission'. The diagnoses seemed to bias the staff at the hospitals, for example, one of the pseudo patients was writing notes which were construed as 'patient engages in writing behaviour'. The study showed that mistakes can be made with opinions and that diagnoses vary greatly. The danger comes that when people are labelled with a disorder, they will then show the characteristics of that label. ...read more.

The therapist then explains to the patient their thoughts and feelings. This was the first attempt to explain mental illness and is supported by comprehensive theory and practice. However, critics suggest that there is too much emphasis on childhood trauma and by looking too closely at early conflicts, present conflicts may be overlooked. To conclude, defining a person or their behaviour as 'abnormal' can imply that they are undesirable and require to change to the 'norm', however using a definition to explain abnormality is unavoidable but necessary so that psychologists can distinguish between 'normal' and 'abnormal'. The classification and diagnosis should be objective and produce the same results no matter which psychologist gives the diagnosis, but this is not always achievable, as demonstrated by the experiment conducted by Rosenhan (1973). Critics (Szasz, 1962, MacLeod 1998 and Farina, 1992) suggested that labelling could have a negative effect, such as former patients being discriminated against or becoming pigeon holed and thus leading them to 'live' their diagnosis. The classification of disorders although extensive, does not take into account the causes of abnormal behaviour, if the causes are unknown how can the disorder be treated correctly? Abnormal behaviour and mental illness are stigmatized in most cultures; therefore defining, classifying and diagnosing abnormality may always be complex task. Word count 1647 ?? ?? ?? ?? Nicky Goddard ...read more.