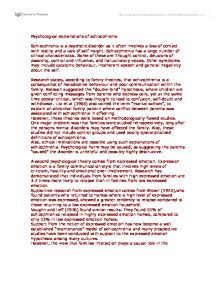 Psychological explanations of schizophrenia Schizophrenia is a psychotic disorder as it often involves a loss of contact with reality and a lack of self insight. Schizophrenia has a large number of clinical characteristics. Some of these are Thought control, delusions of passivity, control and influence, and hallucinatory voices. Other symptoms may include catatonic behaviour, incoherent speech and general negativity about the self. Research states, according to family theories, that schizophrenia is a consequence of maladaptive behaviour and poor communication within the family. Bateson suggested the "double-bind" hypothesis, where children are given conflicting messages from parents who express care, yet at the same time appear critical, which was thought to lead to confusion, self-doubt and withdrawal. Litz et al (1965) also coined the term "marital schism", to explain an abnormal family pattern where conflict between parents was associated with schizophrenia in offspring. However, these theories were based on methodologically flawed studies. ...read more.

Support from the notion of expressed emotion has now become a well established "maintenance" model of schizophrenia and many prospective studies have been conducted with support to the expressed emotion hypothesis among many cultures. However, the view that families interaction plays a causal role in the development of schizophrenia lacks empirical support, and such approaches have difficulty in explaining why abnormal patterns develop in some, rather than all of the children in the family. The research is only correlational. Also, there is a lack of explanatory power, given that communication may be similar between schizophrenic and non-schizophrenic families, the theory lacks validity-they don't account for the varied expression and severity of the disorder. Researchers have also investigated the physiological abnormalities associated with schizophrenia, leading to cognitive malfunctioning. According to Hemsley's neuropsychological model of schizophrenia, one of the cause of this disorder is the result of a breakdown in the relationship between previously stored information and new, incoming sensory information. ...read more.

________________________________________ Your essay looks very good, but I think you might be missing out on a few AO1 marks by not explaining the theories themselves in enough detail, particularly the double-bind theory, but you definetly have enough breadth. Try to include the phrase "this prevents the development of an internally coherent construction of reality, manifesting the symptoms of schizophrenia." Examiners will like that and put a big fat tick next to it. Possibly discuss how it requires prolonged exposure. You have an introduction paragraph at the beginning which I personally would cut out. Explaining the clinical characteristics in an essay that asks for Psychological explanations isn't going to gain you any marks; the question isn't asking for that. Just jump straight in there by saying "Psychological explanations of schizophrenia include..." That way you're not wasting any time writing paragraphs that the examiners will just draw a line through. But overall, if I were an examiner, I'd give that an A. Well done ...read more.