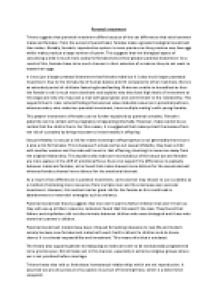 Transfer-Encoding: chunked ﻿Parental investment Trivers suggests that parental investment differs because of the sex differences that exist between males and females. From the outset of parenthood, females make a greater biological investment then males. Notably, female?s reproductive system is more precious as they produce very few eggs whilst males produce a large number of sperm. This suggests that the biological aspect of conceiving a child is much more costly for females hence their greater parental investment. As a result of this, females have to be much chooser in their selection of a male as they do not want to waste their eggs. It is not just a larger prenatal investment that females make but it is also much larger postnatal investment. Due to the immaturity of human babies at birth compared to other mammals, there is an extended period of childcare featuring breastfeeding. ...read more.

This is because if a male carries out sexual infidelity, they bear a child with another woman and the male will invest in that offspring, diverting his resources away from the original relationship. This explains why males are more jealous of the sexual act and females are more jealous in the shift of emotional focus. Buss et al support the differences in jealously between males and females, as he found that males showed more distress for the sexual element whereas females showed more distress for the emotional element. As a result of sex differences in parental investment, some women may choose to use cuckoldry as a method of obtaining more resources from multiple men and thus decrease own personal investment. However, this method carries great risk for the female as this could lead to abandonment or retention strategies such as violence. ...read more.

Trivers theory also tells us little about homosexual relationships which are not reproductive. It assumed we are all a product of our genes in pursuit of fostering these, which is a determinist viewpoint. The theory is also very nature and evolutionary based. Trivers theory assumes sexual attraction is all about babies and ignores it can be for fun rather than reproduction, highlighted by the wide use of contraception. Not all mating is long term and women do also engage in short term relationships such as one night stands and affairs. Therefore, his theory is oversimplified, animalistic, and deterministic and suffers from evolutionary reductionism. In conclusion, a physiological approach can better explained to show the different parental investments. Geher et al found that males showed a greater AMS arousal when presented with scenarios that showed the real costs of parenting. This is a consistent with the theory of parental investment as males are found to be less prepared than females for dealing with parental issues. ...read more.