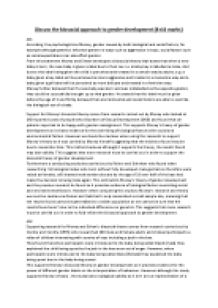 Transfer-Encoding: chunked ﻿Discuss the biosocial approach to gender development (8+16 marks) AO1: According the psychologists as Money, gender caused by both biological and social factors, for example although genetics influence gender in ways such as aggression in boys, social factors such as social expectations can also effect gender. From this statement Money and Erhart developed a biosocial theory that states that when a new baby is born, the new baby is given a label due to their sex i.e. a baby boy is labelled as male. And due to this label being given the child is perceived and treated in a certain way by adults, e.g. a baby given a boy label will be perceived as more aggressive and treated in a masculine way and a baby given a girl label will be perceived as more delicate and treated in a feminine way. ...read more.

This matters because although it supports the theory, the results found may lack validity. This suggests that more research must be carried out in order to support the biosocial theory of gender development. Furthermore a conducting study was carried out by Reiner and Gehrhart who found when researching 14 biological males who born without fully developed male genitals so therefore were raised as females, still showed male tendencies and by the age of 16 over half of the boys had made the decision to being male again. This contradicts Money?s theory of gender development and the previous research he found as it provides evidence of biological factors overriding social and environmental factors. However when comparing this study to Money?s research and theory we must be cautious as Reiner and Gehrhart?s only researched a small sample size, meaning that the results found cannot be generalised to a wider population as we cannot be sure that the results found aren?t due to the individual differences or genetics. ...read more.

However although this study supports Money?s theory , the study lacks ecological validity as it isn?t a true representation of a situation by which labels can be used to effect gender development. Also the study only uses participants that are adults, therefore the results found many not be able to be generalised to a wider population of the elderly or children. This suggests that more research must be carried out in order to fully support the biosocial approach to gender development. In conclusion, although the biosocial approach of gender development takes into consideration both biological and social factors, research on the theory has been quite contradicting. For example Condry and Condry found evidence supporting the theory however case studies such as Bruce Remier contradict the research found. This suggests that Money?s theory considering all the research found should be revised in order to explain different situations of gender and provide an adequate explanation of gender development. ...read more.