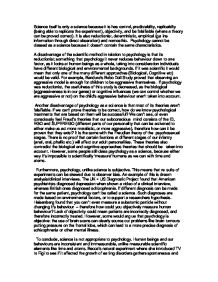 Science itself is only a science because it is has control, predictability, replicabilty (being able to replicate the experiment), objectivity, and be falsifiable (where a theory can be proved correct). It is also reductionist, deterministic, empirical (gains information through direct obseration) and nomoethic. Psychology cannot be classed as a science because it doesn't contain the same characteristics. A disadvantage of the scientific method in relation to psychology is that its reductionist; something that psychology it never reduces behaviour down to one factor, as it looks at human beings as a whole, taking into consideration individuals have different biological and environmental backgrounds. If it was scientific it would mean that only one of the many different approaches (Biological, Cognitive etc) ...read more.

It is the same with the Freudian theory of the psychosexual stages. There is no proof that certain fixations at different stages of our infantry (anal, oral, phallic etc.) will affect our adult personalities. These theories also contradict the biological and cognitive approaches theories that should be taken into account. However, some people still class psychology as a science, because either way it's impossible to scientifically 'measure' humans as we can with time and atoms. Furthermore, psychology, unlike science is subjective. This means that results of experiments can be skewed due to observer bias. An example of this is dream analysis/clinical interviews. The UK + US Diagnostic Project found that American psychiatrists diagnosed depression when shown a video of a clinical interview, whereas British ones diagnosed schizophrenia. ...read more.

Becca's natural experiment where she introduced TV to Figi to see if it affected the growth of eating disorders gathers spontaneous and qualitative data, yet it lacks many factors that are vital for the scientific method: control of the IV, and replicability because it was a one off experiment. However, it is desirable for psychology to be called a science because people trust it, and would feel diagnosis' that were made would be more reliable. But if psychology were truly a science, it would mean our actions are due to just one cause, which is inappropriate because humans have varied biological and environmental backgrounds meaning there are many different justifications for behaviour, hence the different psychological approaches. However, is science really scientific? Kuhn argued that scientists themselves aren't always objective as their findings could be influenced by wanting to prove their own 'scientfic' theories. ...read more.