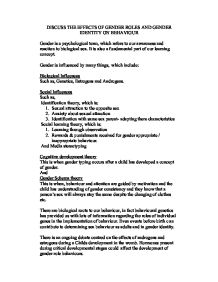 DISCUSS THE EFFECTS OF GENDER ROLES AND GENDER IDENTITY ON BEHAVIOUR

DISCUSS THE EFFECTS OF GENDER ROLES AND GENDER IDENTITY ON BEHAVIOUR Gender is a psychological term, which refers to our awareness and reaction to biological sex. It is also a fundamental part of our learning concept. Gender is influenced by many things, which include: Biological Influences Such as, Genetics, Estrogens and Androgens. Social Influences Such as, Identification theory, which is: 1. Sexual attraction to the opposite sex 2. Anxiety about sexual attraction 3. Identification with same sex parent- adapting there characteristics Social learning theory, which is: 1. Learning through observation 2. Rewards & punishments received for gender appropriate / inappropriate behaviour. And Media stereotyping Cognitive development theory This is when gender typing occurs after a child has developed a concept of gender. And Gender Schema theory This is when, behaviour and attention are guided by motivation and the child has understanding of gender consistency and they know that a person's sex will always stay the same despite the changing of clothes etc. There are biological roots to our behaviour, in fact behavioural genetics has provided us with lots of information regarding the roles of individual genes in the implementation of behaviour. Even events before birth can contribute to determining sex behaviour as adults and in gender identity. There is an ongoing debate centred on the effects of androgens and estrogens during a Childs development in the womb. ...read more.

During each stage certain body parts are particularly sensitive to sexual stimulation and the child's limbo is focused on these parts. * Oral stage- mouth * Anal stage- anus * Phallic stage- genital region Freud believed that personality and its three parts motivate behaviour. Freud's phallic stage is important for moral development, during this stage the oedipal conflict occurs. Resolution of the Oedipus conflict in boys is strong but a little girl's resolution of penis envy is never complete. Frustration or over indulgence in any stage may result in fixation when some of the child's limbo remains permanently locked in one stage and the method of obtaining satisfaction, that characterized that stage will dominate their adult personality which will affect their adult behaviour. As a child interacts with the world their personality is formed. Children internalise society's expectations of them with behavioural differences that can be observed between boys and girls at a young age. Males are discouraged from expressing their feelings and there is pressure on them to appear strong. The world of a child is not gender neutral; as it should be Gender role stereotyping is evidence of this. When we look at how young children learn to approach and play with toys we see that boys are encouraged to play with cars and girls to play with dolls. ...read more.

pointed out, "First, girls show more emotional sensitivity.... Second, girls are less venerable developmentally than boys, and are less likely to suffer from learning disabilities, various language disorder, or hyperactivity. Third, boys tend to be more physically active than girls. Fourth, girls tend to be more timid than boys..." (PSYCHOLOGY FOR A2 LEVEL, M.W. ESYWICK, page 698) In conclusion I would like to say, that I believe that behaviour is learned from society through the process of reinforcement and modelling. Behaviours such as, Sex-role behaviour can be learned by vicarious reinforcement. When you think about it makes sense for a person to keep doing things they are rewarded for and to stop doing things we are not. I found these quotes below and I agree with both of them on this subject. "In the theory of gender I began from zero. There is no masculine power or privilege I did not covet. But slowly, step-by-step, decade-by-decade, I was forced to acknowledge that even a woman of abnormal would cannot escape her hormonal identity. (Paglia, Camille, 1947 American Author Critic Educator) (Taken from: www.borntomotivate.com) Except for their genitals, I don't know what immutable differences exist between men and women. Perhaps there are some other unchangeable differences; probably there are a number of irrelevant differences. But it is clear that until social expectations for men and women are equal, until we provide equal respect for both sexes, answers to this question will simply reflect our prejudices. (Weisstein, Naomi) (Taken from: www.borntomotivate.com) By Joanne Reid ...read more.