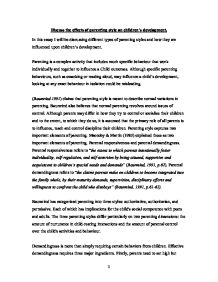 Discuss the effects of parenting style on children's development.

Discuss the effects of parenting style on children's development. In this essay I will be discussing different types of parenting styles and how they are influenced upon children's development. Parenting is a complex activity that includes much specific behaviour that work individually and together to influence a Child outcomes. Although specific parenting behaviours, such as smacking or reading aloud, may influence a child's development, looking at any exact behaviour in isolation could be misleading. (Baumrind 1991) claims that parenting style is meant to describe normal variations in parenting. Baumrind also believes that normal parenting revolves around issues of control. Although parents may differ in how they try to control or socialise their children and to the extent, to which they do so, it is assumed that the primary role of all parents is to influence, teach and control discipline their children. Parenting style captures two important elements of parenting. Maccoby & Martin (1983) explained these as two important elements of parenting. Parental responsiveness and parental demandingness. Parental responsiveness refers to "the extent to which parents intentionally foster individuality, self-regulation, and self-assertion by being attuned, supportive and acquiescent to children's special needs and demands" (Baurmind, 1991, p.62). ...read more.

Consequently, authoritarian parents are prone to model the more aggressive modes of conflict resolution and are lax in modeling affectionate, nurturant behaviors in their interactions with their children. (Baumrind, 1991) In sharp contrast, Indulgent parents tend to be moderate to high in nurturance, but low in parental control. These parents place relatively few demands on their children and are likely to be inconsistent disciplinarians. They are accepting of the child's impulses, desires, and actions and are less likely than other parents to monitor their children's behavior. Although their children tend to be friendly, sociable youngsters, compared with others their age they lack knowledge of appropriate behaviours for ordinary social situations and take too little responsibility for their own misbehavior. (Baumrind, 1991) Uninvolved parents on the other hand are low in both responsiveness and demandingness. In extreme cases, this parenting style might encompass both rejecting-neglecting and neglectful parents, although most parents of this type fall within the normal range, because parenting style is a typology, rather than a linear combination of responsiveness and demandingness, each parenting style is more than and different from the sum of its parts. (Baumrind, 1991) ...read more.

in Illinois. The findings of this study found that children whose parents were experiencing marital distress had more distressed children and showed more negative peer interaction and were susceptible to illness. There are also studies of parenting styles in different cultures. Belsky's (1984) study was to examine factors related to authoritative and authoritarian parenting practices in Chinese mothers with preschoolers. As well as looking at the global parenting typologies this study also looked into the individual component elements of the two authoritative and authoritarian parenting. As expected, child characteristics, maternal characteristics and contextual factors predicted mothers' parenting practices. The results suggested that maternal depression, child temperament and degree of parenting daily hassles might have cross-culturally influenced on parenting practices. However, the significant influence of culturally specific parenting beliefs on parenting was also found. Chinese parents use of authoritative and authoritarian parenting were both in some degree embedded traditional Chinese parenting beliefs, the concept of training. In conclusion, parenting is a growing and continuous process. Although not every style will work in every household and every situation, some type of parenting style should be established, hopefully one with much love, warmth, support, and discipline. Adolescence is a time of growth for young people; consequently, adolescents need their parents at this confusing time for direction and guidance in making the right decisions. ...read more.