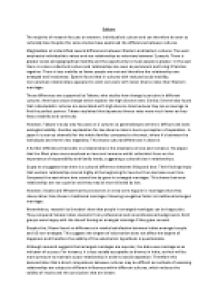 Transfer-Encoding: chunked ﻿Culture The majority of research focuses on western, individualistic culture and can therefore be seen as culturally bias. Despite this some studies have examined the differences between cultures. Moghaddam et al identified several differences between Western and Eastern cultures. The west emphasise individualistic values and see relationships as voluntary between 2 people. There is greater social and geographical mobility and the opportunity to meet people is greater. In the east there is a more collectivist culture and relationships are seen as permanent and bring 2 families together. There is less mobility so fewer people are met and therefore the relationships are arranged and involuntary. Epstein found that in cultures with reduced social mobility, non-voluntary relationships appeared to work very well, with lower divorce rates than Western marriages. ...read more.

Ho argues that the West place more emphasis on love and romance whilst collectivist focus on the importance of responsibility and family needs, suggesting a cultural bias in relationships. Gupta et al suggests that there is a cultural difference between liking and love. Their findings imply that western relationships scored highly at the beginning for love but then decrease over time. Compared the east where love scored low by grew in arranged marriages. This shows that west relationships are not superior and they may be more blinded by low. However, Xioahe and Whyte that found women in china were happier in marriages that they chose rather than those in traditional marriages. Showing a negative factor to traditional arranged marriages. Nevertheless, research by Umadevi show that people in arranged marriages can be happy also. ...read more.

It also should be noted that there are differences within cultures. For instance, Paris is in the same culture as London but there are still many relationship differences between each place which means research suffers from imposed etic. Also most of the research is done with questionnaires and therefore the risk of providing data that is objective and reliable is difficult. Participants are likely to respond with socially desirable answers to keep in with their cultural norms, which threatens the internal validity. There is also historical bias because a lot of the research was done early 1990s. Now there is urbanisations of many non-western countries which might change the way relationships are made. In conclusion, Pinker suggested that romantic relationships are a form of evolutionary process involved to promote survival and reproduction amongst human beings. He believed that this is a universal process and thus opposes the idea of there being a difference between cultures. ...read more.