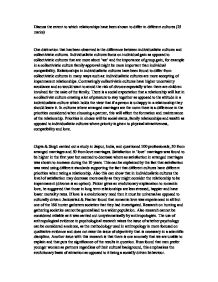 Discuss the extent to which relationships have been shown to differ in different cultures.

Satisfaction in 'love' marriages was found to be higher in the first year but seemed to decrease where as satisfaction in arranged marriages was shown to increase during the 10 years. This can be explained by the fact that satisfaction was rated using different standards supporting the fact that different cultures have different priorities when rating a relationship. Also this can show that in individualistic cultures the level of satisfaction may decrease more easily as they might consider the relationship to be impermanent (divorce is an option). Pinker gives an evolutionary explanation to romantic love, he suggested that those in long term relationships are less stressed, happier and have lower mortality rates. ...read more.

Buss found that men prefer younger women as partners regardless of their cultural background, this emphasises the evolutionary basis of attraction as opposed to it being a socially driven behaviour. Evolutionarily a younger woman has higher reproductive value (potential child bearing years) and this is a trait that is desirable universally. The nurture side to this debate would argue that younger women are more desirable due to media messages such as 'lad mags' emphasising the importance of youth. Most research is carried out on heterosexual couples this raises the issue of sub-cultural bias, as sometimes differences within a culture are stronger than differences between cultures. As the homosexual population is not represented in research findings cannot be generalised as a consequence of this cultures themselves are not fully represented in research. ...read more.