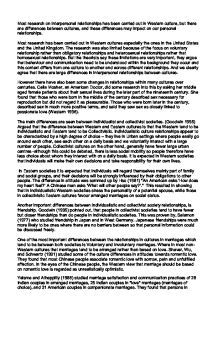 Discuss the nature of relationships in different cultures

However there have also been some changes in relationships within many cultures over centuries. Celia Mosher, an American Doctor, did some research into this by asking her middle aged female patients about their sexual lives during the later part of the nineteenth century. She found that those who were born in the middle of the century described sex necessary for reproduction but did not regard it as pleasurable. Those who were born later in the century, described sex in much more positive terms, and said they saw sex as closely linked to passionate love (Western 1996).

The main differences are seen between individualist and collectivist societies. (Goodwin 1995) Argued that the difference between Western and Eastern cultures is that the Western tend to be Individualistic and Eastern tend to be Collectivistic. Individualistic culture relationships appear to be characterized by a high degree of choice – they live in Urban settings where people easily go around each other, see each other on a daily basis and we voluntarily interact with a large number of people. Collectivist cultures on the other hand, generally have fewer large urban centres -although this could be debated, there is less social mobility so people therefore have less choice about whom they interact with on a daily basis. It is expected in Western societies that individuals will make their own decisions and take responsibility for their own lives.

In Eastern societies it is expected that individuals will regard themselves mainly part of family and social groups, and their decisions will be strongly influenced by their obligations to other people. The difference in attitude was summed up by Hsu (1981) "An American asks 'How does my heart feel?' A Chinese man asks 'What will other people say?'."  This resulted in showing that in individualistic Western societies stress the personality of a potential spouse, while those in collectivistic Eastern cultures favour arranged marriages on social status.

Another important differences between individualistic and collectivist society relationships, is friendship. Goodwin (1995) pointed out, that people in collectivist societies tend to have fewer but closer friendships than do people in individualistic societies. This was proven by, Salamon (1977) who studied friendship in Japan and in West Germany. Japanese friendships were much more likely to be ones where there are no barriers between so that personal information could be discussed freely.

One of the most important differences between the relationships in cultures in marriages which tend to be between both societies is Voluntary and Involuntary marriages. Where in most non-Western cultures that marriages tend to be arranged rather than based on love. Shaver, Wu, and Schwartz (1991) studied some of the culture differences in attitudes towards romantic love. They found that most Chinese people associate romantic love with sorrow, pain and unfulfilled affection. In the eyes of the Chinese people, the Western view that marriage should be based on romantic love is regarded as unrealistically optimistic.

Yelsma and Athappilly (1988) studied marriage satisfaction and communication practices of 28 Indian couples in arranged marriages, 25 Indian couples in "love" marriages (marriages of choice), and 31 American couples in companionate marriages. They found that persons in arranged marriages had higher marital satisfaction scores, as measured by the Dyadic Adjustment Scale (Spanier, 1976), than either the love-married persons in India or the companionate-married persons in the United States. Furthermore, their results indicated that husbands and wives in arranged marriages were more satisfied with their marital relationships than were the husbands and wives in the U.S. sample. In contrast to these findings, in a partial replication of this study with a sample of 586 married women in the People's Republic of China,

Xiaohe and Whyte (1990) found that women in free-choice marriages were consistently more satisfied with their marital relationship than were women in arranged marriages. They also found that the women who had been married for 20 to 24 years reported having a higher quality of marriage than did women who had been married for fewer years.But the distinction between individualistic and collectivistic should not be taken too far. Even in the societies in which arranged marriages are not the norm, there is often so restricted element of choice of marriage partner. In individualistic societies, parents sometimes attempt to influence the marriage choice of their children.