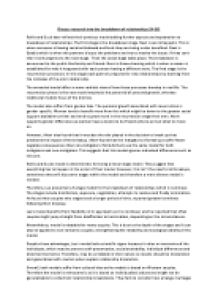 Discuss the research into breakdown of relationships (24 marks)

Transfer-Encoding: chunked ﻿Discuss research into the breakdown of relationships (8+16) Rollie and Duck later refined their previous model adding further aspects and explanation to breakdown of relationships. The first stage is the breakdown stage. Next is are Intrapsyhic. This is when someone id having social withdrawal and feels they are being under benefited. Next is Dyadic which is when the partners discuss the problems and try to resolve the issues. If they can?t then it will progress to the next stage. Then the social stage takes place. The breakdown is announced to the public like family and friends. Next is Grave-dressing which is when a reason is established for why it happened with each person having a different story. The final stage is the resurrection processes. In this stage each partner prepares for new relationships by learning from the mistakes of the prior relationship. ...read more.

This suggests that this model ignores individual differences such as this one. Rollie and Ducks model is deterministic for being a linear stage model. They suggest that everything has to happen in the order of their model. However, this isn?t the case for all breakups, sometimes they will skip some stages within the model and therefore a more diverse model is needed. Therefore, Lee presented a 5-stage model for the breakdown of relationships which is nonlinear. The stages include disinfection, exposure, negotiation, attempts to resolve and finally termination. He found that couples who stages took a longer period of time, reported greater loneliness following their breakup. Lee?s model benefits from flexibility in its approach as it is nonlinear, and he reported that often couples might jump straight from disaffection to termination, depending on the circumstances. ...read more.

Alike, both models suffer from heterosexual bias. The models have been developed on experiences of heterosexual individuals and therefore cannot explain experiences from homosexual individuals and limits the models explanations. However, both models can be used to prevent the breakdown of relationships. It may be possible to intervene before the breakdown progresses and suggest an appropriate intervention. For example, encourage individuals to consider the positives of the relationship if they are in the intrapsychic phase of Ducks model. Lastly, although Lee?s model is not linear unlike Ducks model, both are still stage models. Stage models bring a complex issue into a few simple stages. Therefore, both models suffer from reductionism and a more holistic view is needed. In conclusion, the models provide a valuable explanation to why breakdown occurs and has real life application to counselling those going through a breakdown. But, they fail to consider all relationships and therefore there must be other factors that may occur during breakdown and this model cannot solely explain breakdown. ...read more.