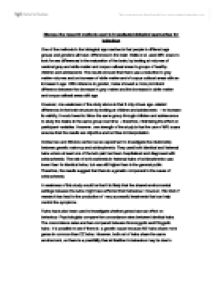 Therefore, the results suggest that there is a genetic component in the cause of schizophrenia. A weakness of this study would be that it is likely that the shared environmental settings between the twins might have affected their behaviour. However, this kind of research has lead to the production of very successful treatments that can help control the symptoms. Twins have also been used to investigate whether genes have an effect on behaviour. Psychologists compare the concordance rates between identical twins. The concordance rates are than compared between Monozygotic and Dizygotic twins. It is possible to see if there is a genetic cause because MZ twins share more genes in common than DZ twins. However, both set of twins share the same environment, so there is a possibility that similarities in behaviour may be due to environmental factors and not genes. ...read more.

Damage to the brain is could be done by surgically cutting or burning away a part of the brain, or by using drugs and other techniques to shut off parts of the brain temporarily. The animals with damaged brains will then be compared with a control group containing animals with fully-functioning brains. Advantages of using animals are: they are easier to monitor during research than humans; large samples can usually be bred in a short period and animals are more likely to be na�ve participants which results in a higher validity as there will be less chance of demand characteristics. However, disadvantages of using animals are that they might be more expensive as only the highest level of care is acceptable, whereas humans can go home and look after themselves. Also, human have different brains to animals, so any change in behaviour in animals might not necessarily mean that humans will behave in the same way. ?? ?? ?? ?? ...read more.