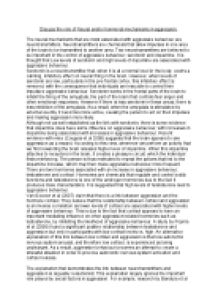 Discuss the role of neural and hormonal mechanisms in aggression.

A study by Popma et al (2006) found a significant positive relationship between testosterone and aggression but only in participants with low cortisol levels vs. high. An alternative explanation of this link between low cortisol and aggression is that low autonomic nervous system arousal, and therefore low cortisol, is experienced as being unpleasant. As a result, aggressive behaviour becomes an attempt to create a stressful situation in order to provoke autonomic nervous system activation and cortisol release. The explanation that demonstrates the link between neurotransmitters and aggression is arguably reductionist. This explanation largely ignores the important role played by social factors in aggression. For example, research by Bandura et al showed that social learning can be a powerful influence on the aggressive behaviour of children, and Zimbardo et al has provided support for the idea that deindividuation can increase aggressive behaviour in particular situations where personal responsibility is diminished. Such studies demonstrate that there are clearly other important factors involved in aggressive behaviour, making the genetic explanation reductionist. ...read more.

A lot of research into this link is conflicting. A number of studies have found that high levels of testosterone correlate positively with high levels of aggression, but other studies have not found such a relationship. For instance, Bain et al found no significant differences in testosterone levels between men who had been charged with murder or violent assault and men who had been charged with non-violent crimes such as burglary. In some cases, higher levels of testosterone have actually appeared to have a positive affect on individuals rather than a negative, aggressive one. For instance, Zitzmann (2006) argues that not only is the link between testosterone and aggression not proven, but that testosterone may also have many positive effects for males. For example, increases in positive mood and decreases in negative mood were confirmed following testosterone replacement therapy in a study of 208 men with testosterone deficiency. Therefore there are clearly issues with research into the link between testosterone and aggression and the conflicting research calls into question the reliability of the neural explanation of aggression. ...read more.