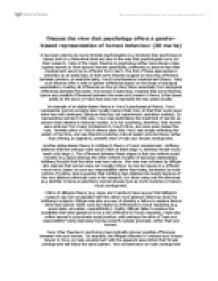 Discuss the view that psychology offers a gender bias

Discuss the view that psychology offers a gender-biased representation of human behaviour (30 marks) It has been claimed by some feminist psychologists (e.g Nicolson) that psychology is biased both at a theoretical level and also in the way that psychologists carry out their research. Many of the major theories in psychology either have shown a bias against women or have ignored women specifically, preferring to assume that their development would be no different from men's. The first of these approaches is described as an alpha bias, in that some theories suggest an enduring difference between genders, an example being Freud's psychosexual development theory. Many such theories offer a view of gender differences based on the ideas of biological essentialism, treating all differences as though they follow essentially from biologicial differences between the sexes. The second is beta bias, meaning that some theories ignore any possible differences between the sexes and present a theory (often based solely on the study of men) ...read more.

The difference between these stages is that one reflects social morality (e.g laws) whereas the other reflects morality of personal relationships. Kohlberg thought that the latter was less mature. This view was criticised by Gilligan who claimed that women were not morally inferior to men but spoke in a different moral voice, based on care and responsibility rather than being dominated by male notions of justice. She suggested that Kohlberg had obtained his results because of the very abstract dilemmas used in his research, but when using real life dilemmas (e.g whether to have an abortion), women showed just as much evidence of mature moral development. Critics of Gilligans theory (e.g Unger and Crawford) have argued that Gilligan's research was not comparable with the rather more abstract dilemmas faced by Kohlberg's subjects. Gilligan was also accused of showing a failure to explore factors other than gender which could be related to differences in moral reasoning (e.g social class, education, race/ethnicity). ...read more.

Questions about similarities and differences between the sexes are not just scientific questions, they may also be seen as highly political. Research has attempted to answer important questions about the differences between males and females using traditional experimental designs that lack the sensitivity to explore the questions being asked. The results of such research have then been used to exclude women from some occupations or to represent women as being victims of their own bodies. Menstruation has, in particular, captured the imagination of both scientists and feminists. The 'discovery' of prementrual syndrome, during which female hormones become so unstable as to aparently render some women capable of murder, has led to a great deal of experimental research in this area (e.g Nicolson, 1997). Nicolson argues that many of the performance and mood differences traditionally identified between premenstrual women and others were products of poor research design. Several other well-designed studies, she claims, reported no differences but these were not published, as their findings were subject to doubt. ...read more.