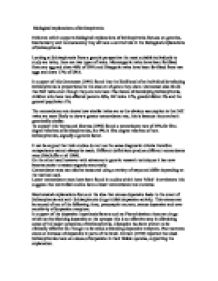 Biological explanations of Schizophrenia Evidence which supports biological explanations of Schizophrenia focuses on genetics, biochemistry and neuroanatomy they all have a central role in the biological explanations of Schizophrenia. Looking at Schizophrenia from a genetic perspective the most suitable individuals to study are twins, there are two types of twins. Monozygotic twins have been fertilised from one egg and share 48% of DNA and Dizygotic twins have been fertilised from two eggs and share 17% of DNA. In support of this Gottesman (1991) found that the likelihood of an individual developing Schizophrenia is proportional to the amount of genes they share. Gottesman also found that MZ twins even though they are rare have 1% chance of developing Schizophrenia, children who have two affected parents 46%, DZ twins 17%, grandchildren 5% and the general population 1%. The concordance rate shows how similar twins are so the obvious assumption is that MZ twins are more likely to show a greater concordance rate, this is because they are both genetically similar. ...read more.

In support of the dopamine hypothesis factors such as Phenothiazines these are drugs which act by blocking dopamine at the synapse this is an effective way in alleviating some of the major symptoms of Schizophrenia. Clozapine has been proven to be clinically effective but thought to be weak at blocking dopamine receptors. Post mortems show an increase of dopamine in parts of the brain. Iversen (1979) reported that dead Schizophrenics have an excess of dopamine in their limbic systems, supporting the explanation. Davis et al (1991) suggests that high levels of dopamine in the mesolimbic dopamine system are associated with positive symptom, while high levels in the mesocortical dopamine are associated with negative symptoms. Despite all this amount of support the dopamine hypothesis does have its limitations; Phenothiazines do not work for everyone as they can increase positive symptoms and not the negative ones. L-dop and amphetamines do not worsen symptoms in all people suffering from Schizophrenia. ...read more.

It is difficult to establish casual relationships because most Schizophrenics have suffered from symptoms for years and have been on long term medication. The above abnormalities are not present in all people with Schizophrenia, therefore it has been suggested that there are two types of Schizophrenia; each having a different underlying pathology. These two types of Schizophrenia were suggested by Crow (1985), type 1 being a genetically inherited disordered associated with dopamine dysfunction and characterised by positive symptoms for example hallucinations and delusions. Acute onset responds well to anti psychotic medication and has good inter-episodic functioning. Type 2 is a neurodevelopment disorder arising from the prenatal insults/preinatal insults characterised by negative symptoms such as social withdrawal this type develops over a period of time. It is characterised by poor pre-morbid functioning and flows a chronic course. This 'two syndrome hypothesis' accounts for many of the apparent contradictions seen in the findings from the research studies on the other hand however it is a rather simplistic view as many diagnosed cases of Schizophrenia show aspects of both types, acute Schizophrenia often develops into the more chronic format. Makayla Suragh ...read more.