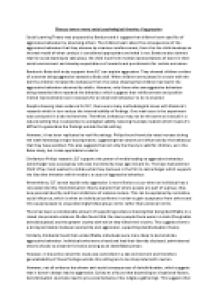 Transfer-Encoding: chunked ﻿Discuss two or more social psychological theories if aggression Social Learning Theory was proposed by Bandura and it suggest that children learn specifics of aggressive behaviour by observing others. The children learn about the consequences of the aggressive behaviour that they observe by vicarious reinforcement, from this the child develops an internal model of what conduct is considered appropriate and what is not. Bandura also claimed that for social learning to take place, the child must form mental representations of event in their social environment and develop expectations of rewards and punishments for certain outcomes. Bandura?s Bobo doll study supports how SLT can explain aggression. They showed children a video of a women being aggressive towards a Bobo doll. When children were placed in a room with the doll the children imitated the behaviour from the video showing that children had learnt the aggressive behaviour observed by adults. ...read more.

Similarly to Philips research, SLT supports the power of media leading to aggressive behaviour. Jamie Bulger was a young boy who was murdered by boys ages 10 and 11. The boys had watched Child?s Play 3 and wanted to imitate what they had seen in the film to Jamie Bulger which supports the idea that imitation within media is a cause of aggressive behaviour. Nevertheless, SLT cannot explain why aggression is more likely to occur when an individual has a concealed identity. Deindividuation theory explains that where people are part of a group, they lose personal identity and their inhibitions of violence reduce. This can be explained by normative social influence, which is when an individual conforms in order to gain acceptance from others and this caused people to unquestioningly follow group norms rather than personal norms. There has been a considerable amount of supporting evidence showing that being identifiable in a crowd can promote violence. ...read more.

Overall to simply suggest that the cause of aggression is due to the lowering of inhibitions is somewhat narrow. Postmes et al found that there is no consistent research to support the argument between reduced inhibitions and anti-social behaviour, but instead that behaviour change in groups has more to do with group norms than anything else, contradicting deindividuation theory. Social explanations to aggression are simplistic as it aims to explain complex human behaviour such as aggression by using simple models and suggests our behaviour is a product of mere stimulus and response. Therefore, it is deterministic as it doesn?t allow for external influences and ignores individual differences. It can also be criticised for being reductionistic as it doesn?t consider any other approaches such as biological factors. The biological approach suggests aggression can occur due to genetic predispositions such as the XYY genotype or testosterone. As a result, a multimodal approach may be a more appropriate and holistic way to explain aggression as it considers both psychological and biological factors affecting aggression. ...read more.