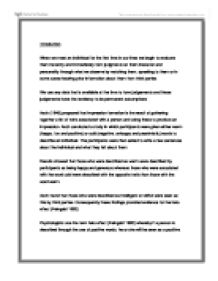 Introduction When we meet an individual for the first time in our lives we begin to evaluate them instantly and immediately form judgments on their character and personality through what we observe by watching them, speaking to them or in some cases hearing prior information about them from third parties. We use any data that is available at the time to form judgements and these judgements have the tendency to be permanent assumptions. Asch (1946) proposed that impression formation is the result of gathering together a list of traits associated with a person and using these to produce an impression. Asch conducted a study in which participants were given either warm (happy, fun and positive) or cold (negative, unhappy and pessimistic) words to describe an individual. The participants were then asked to write a few sentences about the individual and what they felt about them. Results showed that those who were described as warm were described by participants as being happy and generous whereas those who were associated with the word cold were described with the opposite traits than those with the word warm. Asch found that those who were described as intelligent or skilful were seen as this by third parties. Consequently these findings provided evidence for the halo effect (Feingold 1992) Psychologists use the term halo effect (Feingold 1992) whereby if a person is described through the use of positive words, he or she will be seen as a positive. Although Asch's study found a direct link between pre-information and impression formation, many psychologists oppose his view and argue that Asch's study lacks realism and therefore is difficult to apply to real life and subsequently lacks ecological validity. ...read more.

DV- Strength of attributes on a Likert scale. The scale will be numbered from 1-10. 1 being negative and 10 being positive. The Likert scale is an easy way of placing a quantity on impressions felt. Ethics-Prior to the experiment participants were made well aware of the fact that they are allowed to withdraw themselves from the experiment for whatever reason may arise. Further to this participants have signed consent forms (Appendix A3) stating that they are willing to participate as well as being informed that no personal data is being collected and that their results are anonymous and cannot be personally identified as being theirs. About the participants and sample. The sample is split into two groups. Both groups have been randomly selected amongst teenagers/adults who range from the ages of 16-19. These participants are sixth-form students and the sample comprises of both male and female participants. I, together with a peer of mine, will ensure there is an equal gender balance amongst our two samples. Further to this we will ensure that both samples are not ethnocentric and that participants who are participating are from a multitude of backgrounds. However, this can only be achieved to a certain extent as our school does not contain every single ethnic minority there is. Students will be selected if they meet a set standard of criterion e.g. being of a particular ethnic minority (this is to ensure fairness and ensure that the study is less ethnocentric) ...read more.

This wasted time and inconvenienced participants greatly and increased the need to get out as soon as possible. The participants were also told that the stimulus was a teacher applying for the post within our school. This was a flaw because the participants were students in a school and therefore the participants and the results may have reflected their views on teachers rather than the stimulus material. There would be certain modifications I would make to my experiment procedures. These are listed below; 1) 1 hour before experiment - make sure all of the equipment is in place so that participants do not spend time waiting and therefore get agitated. 2) Only proceed with the experiment on a day where you feel that gender and race will be represented equally. I.e. on a day where equal numbers of participants representing different genders and races could participate. 3) Provide a written stimulus which is seen as neutral in the majority of participant's schema. E.g. in a school setting it was not wise to have a written stimulus depicting a teacher as many students have negative feelings towards school and teachers. Suggestions for Future Research Research into this field can be expanded to examine whether if the picture of the stimulus is changed (whilst the written description is the same) across both conditions to examine the effect of race, gender and socio-economic class. I could also change the written description for the stimulus shown. I can change it to convey different political and economical orientations and therefore I could be able to compare the reaction gauged from these orientations. ?? ?? ?? ?? ...read more.