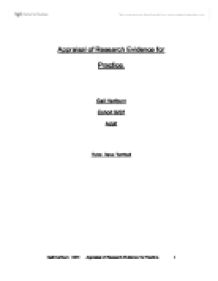 Does a Music Therapy Intervention Reduce Anxiety in Patients either before or after invasive procedures taking place?

Appraisal of Research Evidence for Practice. Gail Hartburn Cohort 0201 Adult Tutor- Dave Turnbull Does a Music Therapy Intervention Reduce Anxiety in Patients either before or after invasive procedures taking place? This assignment is based on the importance of research and how it enables nurses to provide the best quality care within the clinical setting with the use of evidence based practice. The literature retrieval process will be discussed with three articles being summarised and critiqued, along with the rationale for the choice of paper. The research articles will be referred to as papers 1, 2 and 3, (Appendix 1) they will critically analyse the methodology, strengths and limitations of each paper. The findings will also be discussed in the conclusion to decide if the articles are suitable for clinical practice. Research is an essential part of nursing with its importance being reflected on the current use of evidence based practice within the clinical setting (Polit and Hungler, 1997). Evidence-based practice means that evidence is used to either support current practice or guide changes in practice with the use of current research (Youngblut et al, 2001) This first came about so that practices would be based on research evidence rather than tradition to provide best practices within the clinical setting (Ingersoll, 2000). Using research evidence as a basis for practice is important for improving patient outcomes and for keeping pace with new technologies and knowledge developments. Its can change practice for the better and nurses are encouraged to use an evidence based approach, supported by the NMC (2000) this would also be within keeping of achieving clinical governance within the NHS (DOH, 2000). However although research findings are often considered to be appropriate sources of evidence, there is sometimes disagreement about the necessary number of studies and types of research designs considered. In many areas, there are research studies that support a particular practice and others that refute that same practice. ...read more.

Attempts to increase internal validity are likely to reduce external validity as the study is conducted in a manner that is increasingly unlike the real world (Abbot & Sapsford, 1997). The internal validity of each of the papers can be questioned on a number of counts. The researchers of each paper have been caught between the high desire to make there research quantitative and scientific. Paper 1 used an independent measures design as the experimental group and control group were made up of different people. This leaves the study open to the criticism that it was individual differences and not the independent variable that led to differing outcomes for the Dependent Variable. Variables are measurable entity or characteristic; in experiments variables are manipulated to establish cause and effect (Polit, 1995). The design states in paper two the research used repeated measures design but proceeded to compare two distinct groups one experimental and one control it also states that individuals were randomly allocated, this was not a counter balance but an allocation of participant to groups, an experimental or control group, each participant only experienced the procedure once suggesting an independent measures design. This casts some doubt on the validity and reliability of the procedures reported. If the research used repeated measures design then order effects must be controlled for (Powers & Knapp, 1995). However it appears from the procedure that they used independent design and are open to the same critic as paper one i.e. that it is individual differences and not the Music which is responsible for any differences in the Dependent Variable. Paper three does use repeated measures design measuring the difference between pre and post anxiety, however this leaves the research with out a real control group to compare any effects against therefore the validity of any findings will be affected. It is not possible to really establish cause and effect without an adequate control group (Cormack, 2001). ...read more.

In conclusion paper 1 found mixed result it showed significant reduction of State Anxiety and NRS as shown by the ANOVA test of multi variance. The significance was set at .05 which is fine for such a low risk intervention. However there was no significant effect on Patient Satisfaction or crucially PFC. It is the PFC statistic which is the most important for practice as this is the determinant of regular check ups which is the most important aspect in the prevention of cancer in this case. The results of paper 2 found that using STAI the participants in the experimental group reported a significant reduction in anxiety and had reduced state anxiety significantly more than the control group. This was the case even after trait anxiety has been controlled for. However no significant differences were found in the vital signs (pulse rate and blood pressure). This said there is no evidence to suggest that blood pressure needed to be reduced; there were no controls for anti hypertensive or cardiac medication. It leaves this research with the same problem as paper one, it has shown a significant reduction of state anxiety but has not found any other evidence to corroborate and validate the claims made. Overall looking at papers 1 and 2 and recognising they are both floored but have both found very similar results using completely different samples this adds validity to their claims. The non pharmacological nature and cheapness warrants at the very least more research in to this area. Paper three found no significant affects of music in reported anxiety NRS or in the STAI. This paper did not find any real benefits that would suggest the implementation of music therapy. However due to the cheapness and non invasive nature of the experiment I feel that it would be worth using music therapy in practice. These studies have also been cross referenced with many other studies which have similar conclusions this adds to the likely external validity of the findings and the level of external validity which would be accepted. ...read more.