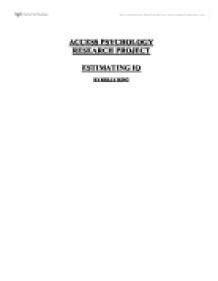 ACCESS PSYCHOLOGY RESEARCH PROJECT ESTIMATING IQ BY KELLY KING ABSTRACT The aim of this investigation was to investigate whether people estimate certain IQ scores for themselves, and their parents, and whether there was any sex differences involved in people estimating IQ's. An opportunity sample of college students and associates of the investigator were asked to answer three questions relating to estimating their own IQ, as well as their parents IQ. It was concluded that the theory relating to sex differences, mainly that males would estimate their IQ higher than a female would, when estimating their own IQ was not supported. The study found that more females than males estimated their IQ to be above average. However, the theory that a participant will estimate a higher IQ score for their father than for themselves was supported, as was the theory that participants will give a high estimate of their fathers IQ than for their mothers was also supported. The theory that participants will give themselves a higher IQ estimate than that of their mother was also supported. INTRODUCTION An IQ test is a standardised test where the score is given as an 'intelligence quotient' or 'IQ'. It is a way of numerically measuring someone's intelligence. These tests were first introduced in France by Alfred Binet (1857 - 1911) to assess children's 'educability' in schools. Research by Hogan (1978) and Higgins (1987) has demonstrated that when people are asked to estimate their own IQ, men give higher estimates than women. ...read more.

In the previous studies by Higgins and Hogan, the questions were written in a high level of English, so for my study, I changed the wording to adapt to current times and the sample used. The wording can be changed for different ethic and social groups, as well as different ages. Implications and suggestions for further research There are a number of further studies that could be carried out. With this particular study, our representation was people from the same area, so it would be interesting to see the results from studies in other social groups, as well as other ethic groups. As well as this further studies into different age groups could be conducted, to find if there are any differences in estimating IQ's between the different generations. This was not looked into on this occasion as our sample did not provide an equal number of different aged individuals. More studies could be conducted into self estimation of IQ across the different ethnic groups, or across the different social groups throughout the country. In conclusion, this investigation has shown that there are no sex differences when estimating your own IQ, and that a Male participant will not give higher estimates of their own IQ than female participants would. The investigation did show that Participants will estimate a higher IQ score for their Fathers than for their Mothers, Participants will estimate a higher IQ score for their fathers than for themselves and Participants will estimate a lower IQ score for their Mothers than for themselves. This study supports 3/4 of the hypothesis. ...read more.