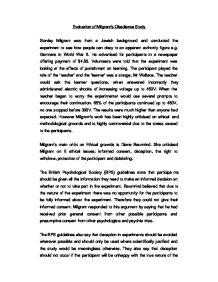 Evaluation of Milgram's Obedience Study Stanley Milgram was from a Jewish background and conducted the experiment to see how people can obey to an apparent authority figure e.g. Germans in World War II. He advertised for participants in a newspaper offering payment of $4.50. Volunteers were told that the experiment was looking at the effects of punishment on learning. The participant played the role of the 'teacher' and the 'learner' was a stooge, Mr Wallace. The teacher would ask the learner questions, when answered incorrectly they administered electric shocks of increasing voltage up to 450V. When the teacher began to worry the experimenter would use several prompts to encourage their continuation. 65% of the participants continued up to 450V, no one stopped before 300V. The results were much higher than anyone had expected. However Milgram's work has been highly criticised on ethical and methodological grounds and is highly controversial due to the stress caused to the participants. Milgram's main critic on Ethical grounds is Diane Baumrind. She criticised Milgram on 5 ethical issues; informed consent, deception, the right to withdraw, protection of the participant and debriefing. The British Psychological Society (BPS) guidelines state that participants should be given all the information they need to make an informed decision on whether or not to take part in the experiment. ...read more.

Milgram also says that the majority of people were happy to have taken part in the experiment, only 1.3% said they were sorry to have taken part. Milgram also had psychiatrists talk to the participants after the experiment, and up to a year later to make sure there was no long term psychological damage. Aronson believes that Milgram was so heavily criticised partly due to the fact that people were shocked by the results not what happened in the experiment. People did not expect to find such high obedience rates. However the experiment is still considered controversial. The way in which Milgram conducted the experiment, the methodology, has also been criticised. The main critics of the methodological issues are Orne & Holland. They criticised Milgram on the grounds that the experiment had a lack of experimental realism, it had mundane realism, the participants showed demand characteristics and there were issues with generalisation. Orne and Holland said that Milgram's experiment had a lack of experimental realism. This means that people didn't take the experiment seriously because they didn't think it was real. However Sheridon & King performed a similar experiment using puppies instead of a human learner. The participants complained about the procedure and some people cried, this shows that the experiment had high experiment realism because people took it seriously. ...read more.

In 1971 they demonstrated the study in Germany, which again found an obedience rate of 85% from 101 males. In Australia in 1974 there was found to be only 40% obedience for males and 16% for females. Foster believes the reasons for the lower obedience rates are due to the fact that the victim was a student with long hair, the experimenter had a different status to that in Milgram's experiment and the female participants were asked to shock a female victim. Other studies in the USA in 1974, Spain in 1981, Austria in 1985 and Holland in 1986 showed high obedience rates of 85%, 90%, 80% and 92% respectively. Smith & Bond's results showed that cross-cultural variations of the experiment can alter the rate of obedience. This shows that Milgram's results cannot be generalised across the population. In conclusion, Milgram was criticised by Baumrind under the ethical grounds of not obtaining informed consent, deceiving his participants, not giving the right to withdraw, not protecting his participants against harm and not fully debriefing. Orne & Holland criticised the experiment's methodology saying there was a lack of experimental realism, it lacked ecological validity and the participants displayed demand characteristics. Milgram was further criticised because his sample was not representative of the population and he didn't demonstrate his experiment in other cultures. ...read more.