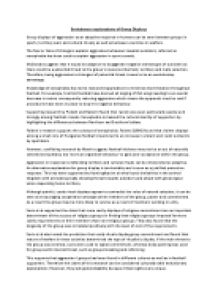 Transfer-Encoding: chunked ﻿Evolutionary explanations of Group Displays Group displays of aggression as an adaptive response in humans can be seen between groups in sports, territory wars and cultural rituals; as well as between countries in warfare. The fear or hate of strangers explains aggressive behaviour towards outsiders, referred as xenophobia has been used to explain aggression in sport crowds. McDonald suggests that it would be adaptive to exaggerate negative stereotypes of outsiders as there could be a potential threat to the group?s resources like food, territory and mate selection. Therefore, being aggressive to strangers of potential threat is seen to be an evolutionary advantage. Knowledge of xenophobia has led to real world application to minimise discrimination throughout football. For example, Scottish football have banned all singing of IRA songs leading to an overall decrease in racism consequently reducing aggression which means the approach must be real if procedures have been in place to stop this negative behaviour. ...read more.

As a result the group may be more likely to survive as a result of members working in unity. Sosis et al supported the claim that more costly displays of religious commitment are an important determinant of the success of religious groups in finding that religious groups imposed far more costly requirements on their members than non-religious groups. They also found that the longevity of the group was correlated positively with the level of cost of the requirements. Sosis et al also tested the prediction that costly rituals display group commitment and found that nature of warfare in these societies determined the type of ritualistic display. If the main threat to the group was external, scars were used to signal commitment, whereas body painting was used for groups with internal threat, such as groups breaking and reforming. This supports that aggression I groups has been found in different cultures as well as in football supporters. ...read more.

they suggest that lynching?s were justified to ensure status differences remained and the dominant position help by white American was not challenges. It was seen as a means to control through fear. Overall, explanations of aggressive displays in warfare are gender bias as they are limited to the behaviour of males rather than females, similarly with research of football supporters. Adams claimed that the idea of the women warrior is almost unheard of within societies. Therefore, our understanding of the displays typically found in warfare are androcentric. Additionally, the evolutionary explanation doesn?t count for individual differences being present and influencing aggression levels within people. For example, Mann et al found that low levels of serotonin are associated with higher levels of aggression, this cannot be explained through evolutionary explanations as there is not a specific trigger present making this approach highly nuture based and reductionistic. Therefore, the aggression cannot be explained solely through the evolutionary approach and thus a multimodal explanation which considers a biological predisposition, which may be triggered by observations in our environment in the presence of firearm can produce aggressive behaviour. ...read more.