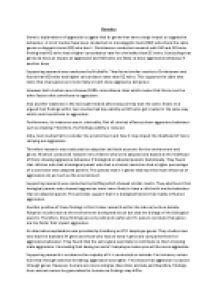 ﻿Genetics Genetic explanations of aggression suggest that its genes that have a large impact on aggressive behaviour. A lot of studies have been conducted on monozygotic twins (MZ) who share the same genes or dizygotic twins (DZ) who don?t. Christianson conducted research with MZ and DZ twins finding that MZ twins had a higher concordance rate for criminality than DZ twins. Concluding that genes do have an impact on aggression and MZ twins are likely to show aggressive behaviour if another does. Supporting research was conducted by McGuffin. They found similar results to Christianson and found that MZ twins had higher concordance rates than DZ twins. This supports the claim that twins that share genes are more likely to both show aggressive behaviour. However both studies never showed 100% concordance rates which means that there must be other factors that contribute to aggression. ...read more.

This proves that it is genes that have the main influence of aggression not as much as the environment. Supporting research was conducted by Holfling which showed similar results. They also found that biological parents who showed aggression were more likely to have a child with similar behaviour than an adopted parent. This provides support that it is biological factors that mainly influence aggression. Another positive of these findings is that it does research within the nature/nurture debate. Adoption studies look at the environment at adopted house but also the biology of the biological parents. Therefore, these findings are very valid and useful and it?s easy to conclude that genes are the factor that impact aggression. An alternative explanation was provided by Sandburg on XYY karyotype genes. They studies men who had the standard XY gene and those who had an extra Y gene and compared them for aggressive behaviour. ...read more.

Therefore, it doesn?t account for all factors that could contribute to aggression. The approach is also deterministic. This is because it fails to consider free will. Not everyone shows aggression and therefore they have the free will to no be aggressive which this approach fails to consider. Also, although adoption studies look at both, the approach favours nature rather than nurture. The biological approach only looks at biology and genes and no other factors like the environment which could also influence aggression. In conclusion, the biological approach provides a clear explanation to how genes impact someone showing aggressive behaviour. However, it doesn?t only focuses on genes and no other approaches such as social. For instance, Bandura?s social learning theory suggests that aggression is caused not only by inherited factors but also environmental factors such as reproduction which is copying (aggressive) behaviour you have witnessed. Therefore, this approach doesn?t show aggression as a whole. ...read more.