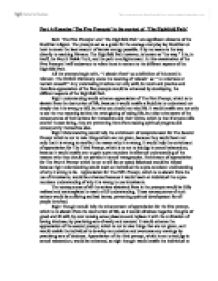 Examine 'The Five Precepts' in the context of 'The Eightfold Path'

Part A-Examine 'The Five Precepts' in the context of 'The Eightfold Path' Both 'The Five Precepts' and 'The Eightfold Path' are significant elements of the Buddhist religion. The precepts act as a guide for the average everyday lay Buddhist on how to create the least amount of karmic energy possible. It by no means is the way directly to reaching Nirvana. The Eightfold Path however, is known as "the way." It is, in itself, the Fourth Noble Truth, and the path to enlightenment. In this examination of the Five Precepts I will endeavour to relate them in context to the different aspects of the Eightfold Path. All the precepts begin with, " I abstain from" so a definition of this word is relevant. The Oxford Dictionary states the meaning of 'abstain' as: " to undertake or restrain oneself." Any undertaking involves not only skill, but work and practice and therefore appreciation of the five precepts would be enhanced by developing the different aspects of the Eightfold Path. Right understanding would enhance appreciation of The First Precept, which is to abstain from the destruction of life, because it would enable a Buddhist to understand not simply that it is wrong to kill, but why you should not take life. ...read more.

Intoxicants do not allow one to retain a clear head, which is vital for all the five precepts to be followed and understood. The consequences of such actions mentioned within the five precepts would be realised with right effort, which could be bad karma and suffering for more than just the person who chooses to indulge. Right Concentration would help the improvement of comprehension for the first precept, abstaining from the destruction of life, as it would enable the individual to overcome the five hindrances that cause such actions to take place, in this case, ill will. Comprehension for the second precept, abstaining from taking what is not given, would be enhanced, as it would enable the individual to overcome the hindrance of desire for sensual pleasures, which would have been the cause of the person wanting to take someone else's possession. For similar reasons, the improvement of comprehension for the third precept, abstaining from partaking in sexual misconduct, would be helped by right concentration as it would enable the individual to overcome the desire for sense pleasures, in this case sex. The fourth precept, abstaining from speaking falsehood, could be more appreciated with right concentration as it would allow the individual to overcome whichever of the 5 hindrances was causing them to lie. ...read more.