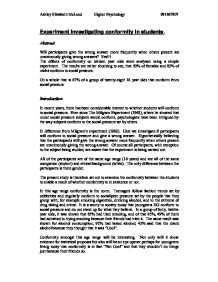 Sets of six pairs of cards were needed. Procedure Participants were sat in an empty room (currently empty due to refurbishment). There were seven chairs laid out in a straight line. The six participants that knew about the experiment were seated in the first six chairs then the subject who was being analysed was seated at the end. The participants were shown two cards, A and B. Card A had a single, vertical black line drawn on it. Card B had three vertical lines drawn on it, one of which matched the vertical line on card A, the other two lines on card B were distinctly different. The participants were asked to compare the line on card A with each of the lines on card B and state for each line on card B, if it was the same length or a different length to that on card A. The accomplices were instructed before hand to give the correct answer unanimously on the first three occasions and on the further three occasions unanimously give the wrong answers. Results The results from the experiment are as follows: Group One (Female) Accomplices Answer Subjects Answer Set 1 Line A (correct) Line A (correct) Set 2 Line B (correct) ...read more.

Discussion The main results were that 67% of a group of twenty-eight 16 years conformed to social pressure. This was exactly what was stated in the experimental hypothesis, before the experiment started. Clear effects of conformity are therefore obviously present in this age group. The struggle to fit in, the nightmare of standing out from the crowd, and the joy of just being like everyone else. Perhaps the conformity shown in the experiment was answers so as not to look silly in front of friends or fellow peers. "If I answer different and get it wrong I will look silly, but if we all get it wrong no one will notice me." There were of course faults and limitations with the study. * More participants could have been used to provide a more wide spread result. * More data sets could have been used to also provide more wide spread results. * A mixed gender group could have been arranged. All of these would have provided a more accurate set of data results. Conclusion Overall I feel that the experimental study went well. I felt that I was organised and professional about going about the experiment. I feel that my results were an accurate response to my hypothesis. I also now feel that I have learnt more abut conformity as a whole, understanding the principles better and feeling more confident about answering questions about it in the examination. ...read more.