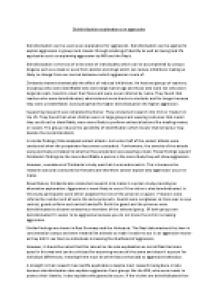 ﻿Deindividuation explanations on aggression Deindividuation can be used as an explanation for aggression. Deindividuation can be applied to explain aggression in groups and crowds through masking of identity as well as having real life application such as explaining aggression by KKK and the Nazis. Deindividuation is the loss of ones sense of individuality which can be accomplished by using a disguise such as a mask or even from alcohol and drugs which can reduce inhibitions making us likely to change from our normal behaviour which aggression is one of. Zimbardo showed dramatically the effect of reduced inhibitions. He had two groups of teachers, one group who were identifiable who wore large name tags and those who were not who wore large lab coats, hoods to cover their faces and were never referred by name. They found that teacher who were deindividuated, administered more shocks to students and for longer because they were unidentifiable. Concluding that the higher deindividuation the higher aggression. ...read more.

Nevertheless, Zimbardo also conducted research into males in a prison study providing an alternative explanation. Aggression is more likely to occur if the victim is also deindividuated. In this study participants were either assigned the role of the prisoner or guard. Prisoners were referred by number and all wore the same jumpsuits. Guards wore sunglasses so there was no eye contact, guard uniform and carried handcuffs. Both the guard and the prisoner were deindividuated to become anonymous members of the selected group. Of both groups are deindividuated it?s easier to be aggressive because you do not know the victim increasing aggression. Similar findings are shown in Nazi Germany and the Holocaust. The Nazi dehumanised the Jews in concentration camps and were treated like animals so made it easier to act in an aggressive manor as they didn?t see them as individuals increasing the likelihood of aggression. ...read more.