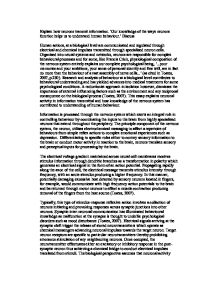 Explain how neurons transmit information. Our knowledge of the ways neurons function helps us to understand human behaviour. Discuss

Explain how neurons transmit information. ‘Our knowledge of the ways neurons function helps us to understand human behaviour.’ Discuss

Human actions, at a biological level are communicated and regulated through electrical and chemical impulses transmitted through specialised neuron cells. Organised into neural systems and networks, neurons are responsible for complex behavioural processes and for some, like Francis Crick, physiological composition of the nervous system entirely explains our complete psychological being, ‘...your memories and your ambitions, your sense of personal identity and free will, are in fact no more than the behaviour of a vast assembly of nerve cells...’ (as cited in Toates, 2007, p.230). Research and analysis of behaviour at a biological level contributes to behavioural understanding and has yielded advances into medical treatments for some psychological conditions. A reductionist approach in isolation however, dismisses the importance of external influencing factors such as the environment and any reciprocal consequence on the biological process (Toates, 2007). This essay explains neuronal activity in information transmittal and how knowledge of the nervous system has contributed to understanding of human behaviour.

Information is processed through the nervous system which exerts an integral role in controlling behaviour by coordinating the inputs to the brain from highly specialized neurons that extend throughout the periphery. The principle component of the nervous system, the neuron, utilises electrochemical messaging to affect a repertoire of behaviours from simple reflex actions to complex emotional experiences such as depression.  Differentiating to specific roles either to convey sensory information to the brain or conduct motor activity in reaction to the brain, neurons translate sensory and perceptual inputs for processing by the brain.

The electrical voltage gradient maintained across neural cell membranes receives stimulus information through dendritic branches as a transformation in polarity which generates an electrical signal in the form of an action potential. Propagating rapidly along the axon of the cell, the electrical message transmits stimulus intensity through frequency, with an acute stimulus producing a higher frequency. In this manner, potentially damaging excessive heat detected by sensory neurons located in fingers, for example, would communicate with high frequency action potentials to the brain and be returned through motor neurons to effect a muscle contraction producing removal of the fingers from the heat source (Toates, 2007).

Typically, this type of stimulus-response reflexive action involves a collection of neurons initiating and provoking responses across synaptic junctions into other neurons. Synaptic inter-neuronal communication has illuminated behavioural knowledge as malfunction at the synapse is thought to underlie psychological disorders such as mood disturbance (Toates, 2007). Electrical signals arriving at the synaptic cleft trigger the release of stored neurotransmitters which operate as chemical messengers advancing neuronal impulses towards the target neuron. Target neuron receptors are specific to particular neurotransmitters thereby prohibiting erroneous stimulation of any neighbouring neurons. Once occupied, the neurotransmitter effectuates either an excitatory or inhibitory response in the post-synaptic neuron thus achieving a chemical bridge to conduct electrical impulses translated from stimuli. The biological perspective assumes that neuronal activity forms the biological infrastructure for psychological experiences such as emotions and moods thus alterations to the neural system, particularly synaptic activity has the ability to alter behaviour and mood. Through manipulation of the specific properties of neurotransmitter release, availability and deactivation, medical therapies have been advanced. For example, diminished serotonin has been implicated in attention and mood disorders and delaying the re-absorption or re-uptake into the releasing neuron favours alleviation of depressive symptoms. The anti-depressive agent Prozac, capitalises on this process by selectively targeting seretonergic synapses to block serotonin reuptake, which results in increased bio-availability of serotonin and improved mood (Toates, 2007).

The full range of human behaviour is more comprehensive than simple reflexive actions or low mood but the relevance of understanding neuronal function at a singular level becomes clear when the billions of individual neurons that make up the brain and combine to create the neural systems responsible for particular roles are considered. For example, invasive investigations in animal models have allowed researchers to isolate the receptive fields of specific neurons in the visual system permitting hemispheric and brain lobe functionality mapping. Comprehension in functional responsibility of brain lobes has translated into evidence supporting biological links with psychological experiences such as memory. Penfield and Rasmussen discovered that surgical patients disclosed vivid historical memories during electrical stimulation of the temporal lobe (as cited in Toates, 2007) and electrical stimulation can now be administered through permanent implants in specific areas of the brain for relief of chronic pain. Alteration of the neural sequence is achieved by either reducing activity in pain related neurons or increasing electrical activity in neurons associated with positive emotions (Toates, 2007). Further supporting evidence for biological influence over behaviour is found in incidents of extensive brain damage resulting in significant alterations to temperament with famous examples such as Phineas Gage enlightening aspects of behavioural science. Surviving an industrial accident that involved prefrontal lobe damage, Gage exhibited little deterioration to intellectual and linguistic abilities but marked transformations in personality, previously considered out of character. Thus, whilst the brain and nervous system exhibit remarkable properties of functional continuation despite insult, focal damage, in this case to the region responsible for inhibition of emotional expression can produce pronounced effects on behaviour lending support to a biological explanation for some aspects of behaviour.

Evidence from diseased and damaged brains provides support for biological perspectives ascribing behaviour through physiology but some aspects of human behaviour do not portray a clear uni-directionality of effect. Whilst the efficacy and mode of action of pharmaceutical agents such as Prozac implicate neuro-chemical involvement in depression, patient response is distinctively individual and Anisman and Zacharko demonstrated that external factors such as stress could contribute to the development of depression in individuals with little biological pre-disposition (as cited in Toates, 2007, p.278). Even the mitigation of pain has been shown by Wall to be contingent on anticipation of relief in patients administered inert substances rather than Morphine (as cited in Toates, 2007, p.261). It would appear that individual beliefs and attitudes can be as important to outcomes as bio-chemical engineering.

Research at a biological level augments understanding of human behaviour and has importantly led to treatments and remedies for some conditions through modification to neural function.  However, an exclusively reductionist approach appears insufficient in the face of evidence highlighting the reciprocal effect of social, environmental and experiential factors.