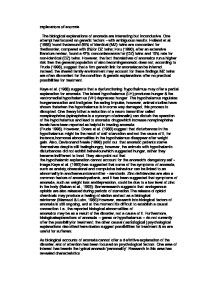 explanations of anorexia . The biological explanations of anorexia are interesting but inconclusive. One attempt hasfocused on genetic factors - with ambiguous results. Holland et al. (1988) found thataround 56% of identical (MZ) twins are concordant for thedisorder, compared with 5%for DZ twins; Hsu (1990), after an extensive literature review, found a 47% concordancerate for (DZ) twins and 10% rate for non-identical (DZ) twins. However, the fact thatrelatives of anorexics run a higher risk than the general population of also becominganorexic does not, according to Frude (1998), suggest that a firm genetic link for anorexiacan be inferred. Instead, the shared family environment may account for these findings.MZ twins are often discordant for the condition & genetic explanations offer no practical possibilities for treatment. Kaye et al. (1988) suggests that a dysfunctioning hypothalmus may offer a partial explanation for anorexia. The lateral hypothalamus (LH) produces hunger & the ventromedial hypothalamus (VH) depresses hunger. The hypothalamus regulates hungersensation and instigates the eating impulse, however, animal studies have shown thatwhen the hypothalamus is in some way damaged, this process is disrupted. One theory isthat a reduction of a neurotransmitter called norepinephrine (epinephrine is a synonym ofadrenalin) ...read more.

For instance, anorexic patients aredescribed as shy, compliant and perfectionists, and recorded high scores on the MinnesotaMultiphasic Personality Inventory (MMPI) for neuroticism, anxiety, social isolation and depression; they also tend to lack self-esteem and are likely to maintain traditional,conservative views about the family and social norms (Davison & Neale 1998). It has alsobe noted (Pliner & Hadock. 1996) that anorexics tend to display high levels of socially orientated perfectionism, i.e., they frequently try to conform to the standards set byothers even when these standards are unachievable (Davison & Neale 1998).Thepersonality of the anorexic can thus be seen to affect the decision to lose weight, theapproach to dieting itself, and may partly explain why dieting becomes so problematic. As has been noted, anorexics often suffer from low self-esteem and depression, and they arealso far more likely to acquiesce to cultural demands and expectations. However, it shouldbe noted that starvation itself affects personality. In a study of semistarvation in maleconscientious objectors, Franklin et al. (1948), noted that all the men became obsessedwith food and displayed higher than normal levels of fatigue, irritability and moodiness,they also had poor concentration levels and reported a loss of interest in sex. ...read more.

Indeed, any deviation from the specified calorie target may be regarded as 'immoral', a sign of greed or lack of self-control (Frude 1998). The anorexic's initial feeling of anxiety and isolation can be replaced by a sense of self-control, the anorexic may see his or herself as `successfully' achieving their desired goal. This sense of control can be extended to the anorexics family and friends, whose concern for the anorexic's condition can be manipulated in a number of ways, for example, they may be made to feel responsible in some way for the illness (Frude 1998). Finally, the process of self-starvation can give the anorexic patient what is referred to as a 'secondary gain' (Frude, 1998, p87). Their duties and responsibilities will be set aside as a result of the illness, they may even be treated in a more childlike way, thus anxieties about adult pressures are alleviated, suggesting to the anorexic that there can be some advantages to being ill. Behaviourist/learning explanations ignore biological accounts: as anorexics are not studied from birth it is impossible to identify exactly when & how anorexic behaviour is acquired through either classical & operant conditioning or SLT. However, the learning approach can explain why rates of anorexia are higher in women than men - as women are more often judged, praised or criticised, for their body size & image than men. ...read more.