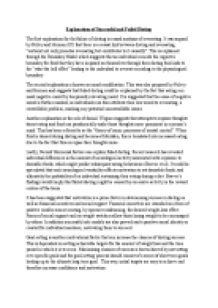 Explanations of Successful and Failed Dieting

﻿Explanations of Successful and Failed Dieting The first explanation for the failure of dieting is causal analysis of overeating. It was argued by Polivy and Herman (85) that there is a causal link between dieting and overeating, ?restraint not only precedes overeating but contributes to it causally?. This is explained through the Boundary Model which suggests that an individual exceeds the cognitive boundary for food that they have imposed on themselves through their dieting this leads to the ?what the hell effect? leading to the individual to overeat according to the physiological boundary. The second explanation is known as mood modification. This was also proposed by Polivy and Herman and suggests that failed dieting could be explained by the fact that eating can mask negative mood by temporarily elevating mood. It is suggested that the cause of negative mood is further masked, as individuals can then attribute their low mood to overeating, a controllable problem, masking any potential uncontrollable issues. ...read more.

Maximising chances of success is best achieved by not setting over specific goals and the goal-setting process should consist of a series of short term goals leading up to the ultimate long term goal. This way, initial targets are easy to achieve and therefore increase confidence and motivation. Research such as Barlett found that dieting success occurs best with a target of reducing calorific intake by 500-1000 calories, resulting in weight loss of about one to two pounds a week, supporting the idea that achievable goal setting is a strong motivational force. This identifies positive practical applications. Considering that on the NHS website it states that, “Many newspapers have reported that half of UK men could be obese by 2030 if trends continue.” It is clear obesity is a huge problem. If success has been found in dieting this could help obese people lose weight and therefore save the £3.7bn a year that they cost the NHS on things like surgeries. On the other hand, there are practical applications for knowing why diets fail. ...read more.

For instance, factors such as motivation that are incidentally part of the explanation of why dieting can be successful can dictate whether a person can overcome urges to overeat. For instance, Williams et al (96) found that motivational style was predictive of weight loss and maintenance. Odgen (2007) points out that if trying not to eat results in overeating then how do anorexics manage to starve themselves? This shows that these explanations are wrong to be so deterministic and supports the fact that people do have free will, as the anorexics who are determined to lose weight, starve themselves until they become ill from being so thin. This does not support the determinist idea that people will not be able to lose weight through dieting. A similar point can be raised with the explanation demonstrating the role of denial. If, by supressing thoughts about food, we actually think about food more then this does not necessarily mean a person will give in and eat food. This is demonstrated through people such as anorexics who still manage to refrain from eating despite potentially thinking of food a lot. ...read more.