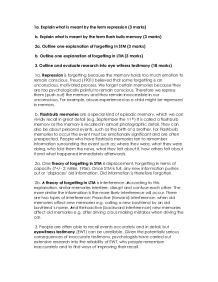 1a. Explain what is meant by the term repression (3 marks) b. Explain what is meant by the term flash bulb memory (3 marks) 2a. Outline one explanation of forgetting in STM (3 marks) b. Outline one explanation of forgetting in LTM (3 marks) 3. Outline and evaluate research into eye witness testimony (18 marks) 1a. Repression is forgetting because the memory holds too much emotion to remain conscious. Freud (1901) believed that some forgetting is an unconscious, motivated process. We forget certain memories because they are too psychologically painful to remain conscious. Therefore we repress them (push out) the memory and they remain inaccessible in our unconscious. For example, abuse experienced as a child might be repressed in memory. b. Flashbulb memories are a special kind of episodic memory, which we can vividly recall in great detail (e.g. September the 11th) It is called a flashbulb memory as the memory is recalled in almost photographic detail. They can also be about personal events, such as the birth of a brother. For Flashbulb memories to occur the event must be emotionally significant and are often unexpected. ...read more.

There are many studies which suggest that EWT is unreliable. Loftus has shown that Eyewitness testimony can be affected by the wording of questions and people's willingness to make the information fit their schemas, which has serious implications for the judicial system since juries are often convinced solely on EWT. Loftus and Palmer (1974) showed the effect of the wording of questions by changing a single verb about the speed of a crashing car. Using the verb 'smashed into' led to a faster speed estimate (41mph) than use of the verb contacted (32mph). Loftus also shows evidence that the style of questioning can dramatically change witness testimonies. Eye witnesses asked about a car passing a barn were later more likely to say they saw a barn, when in fact the barn didn't exist. Loftus believes that in the light of misleading information, the original memory is deleted and replaced by a new false memory. Loftus (1979) also reported a study where participants either saw a man emerge from the lab holding a pen or another holding a paper knife covered in blood. ...read more.

but the errors made were very slightly higher. Many studies have investigated the cognitive interview technique and have found that it provides more accurate information. So perhaps Loftus simply wasn't asking the right questions. Baddeley questions that EWT research is clear cut. He argues that research doesn't prove the deleting of a memory, but interferes with its retrieval. This suggests that reconstructive questioning of witnesses is very important. Yuille & Cutshall (1986) used witnesses of real life crimes, in contrast to Loftus' artificial experiments, and found memories to be accurate, detailed and not easily distorted, so EWT can be reliable. Foster et al (1994) did a study where one group was led to believe a robbery was a real event, and there testimonies would effect the trial, and the other group knew it was just a simulation. Recall was much higher for the first group, showing that knowing there will be consequences creates more accurate memories. In conclusion, EWT can be inaccurate if misleading information is given which is believable and not incredibly significant (e.g. saying a gun instead of a knife) and if witnesses have little reason to distrust it or question it (as in lab experiments). ...read more.