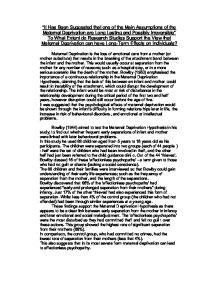 "It Has Been Suggested that one of the Main Assumptions of the Maternal Deprivation are Long Lasting and Possibly Irreversible" To What Extent do Research Studies Support the View that Maternal Deprivation can have Long-Term Effects on Individuals? Maternal Deprivation is the loss of emotional care from a mother (or mother substitute) that results in the breaking of the attachment bond between the infant and the mother. This would usually occur at separation from the mother for any number of reasons; such as a hospital stay, or in a more serious scenario like the death of the mother. Bowlby (1953) emphasised the importance of a continuous relationship in the Maternal Deprivation Hypothesis, claiming that the lack of this between an infant and mother could result in instability of the attachment, which could disrupt the development of the relationship. The infant would be most at risk of disturbance in the relationship development during the critical period of the first two and half years, however disruption could still occur before the age of five. It was suggested that the psychological effects of maternal deprivation would be shown through the infant's difficulty in forming relationships later in life, the increase in risk of behavioural disorders, and emotional or intellectual problems. ...read more.

As the research took place over a long period of time, it is also possible to see whether a certain child is merely going through a difficult phase, or if they have been emotionally disturbed by separation in infancy. When a study is carried out at one set date in time it is possible that the results do not truly reflect the nature of the child and how they have been affected, as it is possible for the child to act out of character for one day, or to be suffering emotional or social difficulty for only a small number or years, rather than a lifetime. Across 26 years it is likely that any anomalous events would also be excluded, so the results would not be negatively affected. The study also has ecological validity as it is looking at real life situations- the way a certain group of children develop- rather than using an artificial laboratory experiment. However it cannot be certain that the separations in infancy caused the behavioural problems witnessed at adolescence. Spending time in hospital may have caused trauma and psychological damage- not due to the separation from the mother, but from experiencing an illness or frequently being taken to a place of insecurity or discomfort. ...read more.

These would be eliminated in a laboratory experiment, however cannot be removed in a real life observational study. Such variables are the care the child receives in hospital- whether the emotional care is sufficient or not, whether an attachment has already been formed with the mother (this may vary amongst a subject group under the age of 1, as there is no specific time for making the first attachment, only a period set by the general trend of infants), and whether or not the infant is visited regularly by his/her mother. Each of these variables could affect the results as the subsequent emotional problems may or may not occur according to the specific situation. If an infant that has not yet formed an attachment with the mother is separated for a month at the age of four months, it is likely that the attachment will be made after returning home, as the critical period has not ended, and therefore no long-lasting or irreversible effects will be observed. However, for a child who has already formed an attachment with the mother, being separated for a month without being visited and without an emotional care substitution would result in deprivation and the breaking of the attachment bond, therefore causing difficulties later in life that may be irreversible. ...read more.