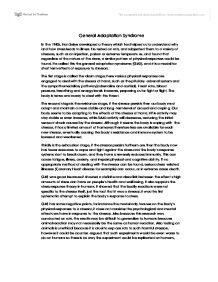 General Adaptation Syndrome In the 1940s, Han Selye developed a theory which has helped us to understand why and how stress leads to illness. He tested on rats, and subjected them to a variety of stressors, such as an injection, poison or extreme temperature, and found that regardless of the nature of the stress, a similar pattern of physical responses could be found. He called this the general adaptation syndrome (GAS), and it is a model for short term effects of exposure to stressors. The first stage is called the alarm stage; here various physical responses are engaged to deal with the stressor at hand, such as the pituitary-adrenal system and the sympathomedullary pathway(adrenaline and cortisol). ...read more.

HPA activity may stay stable or even increase, while SAM activity will decrease, reducing the initial sense of shock caused by the stressor. Although it seems the body is coping with the stressor, it has a limited amount of hormones therefore less are available for each new stressor, eventually causing the body's resistance and immune system to be lowered and weakened. Thirdly is the exhaustion stage, if the stressor persists furthermore then the body now has fewer resources to cope and fight against the stress and the body's response systems start to break down, and they have a severely reduced immunity. This can cause fatigue, illness, anxiety, and impairs physical and cognitive ability. ...read more.

GAS has some negative points, for instance the model only focuses on the body's physical responses to a stressor, it does not consider the psychological and mental effects we have in response to the stressor. Also because this research was conducted on rats, the results may be difficult to generalize to humans because animal reaction may not necessarily be the same as human reaction. Also testing on animals is unethical because it is cruel to expose rats to such harmful stressors, however it could be counter-argued that such experiments would be even worse to do on humans so there is no way the experiment could be replicated on humans, and some good has come out of it because we now understand physical responses to stress, thus prompting stress management techniques to be used. ...read more.