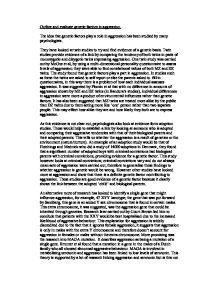 Outline and evaluate genetic factors in aggression. The idea that genetic factors play a role in aggression has been studied by many psychologists. They have looked at twin studies to try and find evidence of a genetic basis. Twin studies provide evidence of a link by comparing the tendency of both twins in pairs of monozygotic and dizygotic twins expressing aggression. One twin study was carried out by McGue et al, by using a multi-dimensional personality questionnaire to assess levels of aggression; they were able to find correlational values of both MZ and DZ twins. The study found that genetic factors play a part in aggression. In studies such as these the twins are asked to self report or else the parents asked to fill in questionnaires, in this way there is a problem of how each individual assesses aggression. ...read more.

An example of an adoption study would be that of Hutchings and Mednick who did a study of 14000 adoptions in Denmark, they found that a significant number of adopted boys with criminal convictions had biological parents with criminal convictions, providing evidence for a genetic factor. This study however looks at criminal convictions; criminal convictions vary and do not always mean acts of aggression were carried out, therefore to generalise these findings to whether aggression is genetic would be wrong. However other studies have looked more at aggression and show that there is a definite genetic factor contributing to aggression. These studies are good evidence of a genetic factor because it clearly shows the link between the adopted 'child' and biological parents. An alternative route of research has looked to identify a single gene that might influence aggression, for example, 47 XYY karotype; the gene that was put forward by Sandberg, this gene is an added Y sex chromosome that is found in certain males. ...read more.

MAOA is involved in metabolising serotonin and aggression has been linked to low levels of serotonin. This theory is supported by a lot of research linking aggression and serotonin but is this not more a hormonal factor rather than a genetic factor? On the other hand it has been shown that this mutation can be inherited (in genetics) which is the cause of maybe lower serotonin levels. Looking at the idea that genetic factors play a role in aggression, on the whole we can identify a major difficulty: the way in which levels of aggressive behaviour is measured or assessed. Many of the studies involve self-report and questionnaires as opposed to observation, this means that individual differences can affect findings. It also creates difficulties in comparing pieces of research as methods are different and so are measures of assessment. This makes research on aggression being genetic rather unreliable and it cannot be used to fully support any theory. ...read more.

This essay has included some of the major studies that have been carried out in the field of genetics and aggression. The writer appears to understand the main arguments but is very brief when describing studies and the meaning of them. In order to improve upon this score more detail needs to be added as well as a good introduction and concluding paragraph.