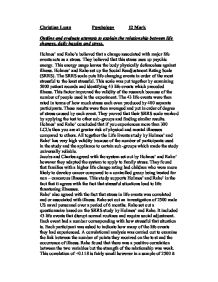 Holmes and Rahes believed that a change associated with major life events acts as a stress. They believed that this stress uses up psychic energy. This energy usage leaves the body physically defenceless against illness.

Christian Lunn Psychology 12 Mark Outline and evaluate attempts to explain the relationship between life changes, daily hassles and stress. Holmes' and Rahe's believed that a change associated with major life events acts as a stress. They believed that this stress uses up psychic energy. This energy usage leaves the body physically defenceless against illness. Holmes' and Rahe set up the Social Readjustment Rating Scale (SRRS). The SRRS scale puts life changing events in order of the most stressful to the least stressful. This scale was put together by examining 5000 patient records and identifying 43 life events which preceded illness. This factor improved the validity of the research because of the number of people used in the experiment. The 43 life events were then rated in terms of how much stress each even produced by 400 separate participants. These results were then averaged and put in order of degree of stress caused by each event. They proved that their SRRS scale worked by applying the test to other sub-groups and finding similar results. ...read more.

Rahe found that there was a positive correlation between the two variables but the strength of the relationship was weak. This correlation of +0.118 is fairly small however in a sample of 2500 it is a significant correlation. This study has high population validity because of the number of participants used in the study. It also has a high ecological validity because the US naval personnel were studied in their everyday life. However this study can be seen as being culture biased because the only participants used for the experiment were US Naval personnel. Michael and Ben-Zur suggest that there is an element missing from the Holmes and Rahe scale. Michael and Ben-Zur carried out a study in which 130 participants with roughly half female and half male participants. Half of the group of participants had recently been widowed and half had recently divorced. Michael and Ben-Zur found that widowed individuals scored higher on life satisfaction before than after the loss, while divorced individuals showed an opposite pattern after divorce. ...read more.

This study is a laboratory study meaning it has low levels of ecological validity also the fact that it is sample biased because all the participants were student's leads to the fact that we can not generalise from these findings. There are methodological problems with many of the studies into daily hassles because the data from the studies in largely correlational meaning causal links between illness and daily hassles can not be determined for definite. Also the fact that participants are often asked to recall their own hassles from pervious months mean that the results are not likely to be reliable because the event can be perceived differently after the situation. Research into life events and daily hassles and illness has not found a huge correlation between them, but the incidence has been significant enough for psychologists and doctors to take the issues seriously and see it as a significant risk to individuals. It is clear that in general sense, the day to day events and major negative events are likely to have a detrimental effect on an individuals health because of a stressor. ...read more.