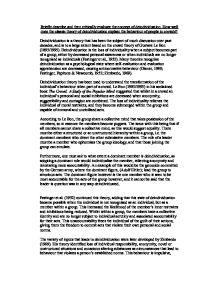 How well does the classic theory of deindividuation explain the behaviour of people in crowds?

Briefly describe and then critically evaluate the concept of deindividuation. How well does the classic theory of deindividuation explain the behaviour of people in crowds? Deindividuation is a theory that has been the subject of much discussion over past decades, and is to a large extent based on the crowd theory of Gustave Le Bon (1895/1995). Deindividuation is the loss of individuality when a subject becomes part of a group, either by decreased personal awareness or when individuals are no longer recognised as individuals (Festinger et al., 1952). Many theories recognise deindividuation as a psychological state where self-evaluation and evaluation apprehension are decreased, causing antinormative behaviour (Diener, 1980; Festinger, Pepitone & Newcomb, 1952; Zimbardo, 1969). Deindividuation theory has been used to understand the transformation of the individual's behaviour when part of a crowd. Le Bon (1985/1995) in his acclaimed book The Crowd: A Study of the Popular Mind suggested that whilst in a crowd an individual's personal and social inhibitions are decreased when anonymity, suggestibility and contagion are combined. The loss of individuality relieves the individual of moral restraints, and they become submerged within the group and capable of immoral and uncivilised acts. ...read more.

Classical Deindividuation Theory has defined antinormative behaviour as being antisocial, (e.g. violence), however this is very closed minded and neglects the possibility that this antisocial behaviour may be normal. Nonetheless, assessing what is normal is very difficult and labour intensive, so in terms of the deindividuation paradigm, stereotypes of socially accepted behaviour must be taken as the norm, as it will be correct for the majority of the time. The problem with this being that those participants whose behaviour is classed as antinormative may be classed incorrectly. This will limit the validity of the results. The classical theory of deindividuation is a useful tool in explaining the behaviour of people in crowds as it helps to understand the concept of a deindividuated member of a group. The classic deindividuation theory originated from crowd observation, and many of the core findings are still valid over 40 years later. Although doubts have been raised about the validity of research, it is difficult to create naturalistic experiments in the correct context. And classifying behaviour and results requires the interpretation of the experimenter, which may cause disagreement. Although deindividuation has been the subject of much debate and redefinition over the years, all of the viewpoints maintain the main element of deindividuation as the psychological state that brings antinormative behaviour. ...read more.