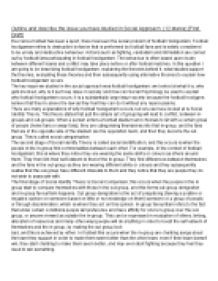 In-group favouritism refers to the fact that under certain conditions people will preference and have affinity for one?s in-group over the out-group, or anyone viewed as outside the in-group. This can be expressed in evaluation of others, linking, allocation of resources and many other ways.people will do anything in order to boost the self esteem of themselves and the in group, by making the out group look bad, and this is achieved by either. In football this occurs when the in-group are chanting songs about the team they support in order to make them seem better than the other team; even if their team doesn?t win, they start chanting to make them seem better, and may even start fighting because they feel they need to win something. Social Psychology, in my opinion, can be used to understand, prevent and stop football hooliganism to some extent, as Social Identity Theory helps explain why football hooliganism occurs. For instance, Social Identity Theory states that when people enter a stadium, they choose to sit with people that also support the team they have come to the stadium to, and, furthermore, choose this group of people are their in-group. ...read more.

It suggests that it is not just the creation of two groups that leads to prejudice, but that they need to have a goal in sight for conflict/prejudice to develop. Secondly, there is a theory that when humans have their sense of humanity taken away from them, and they are in turn treated as if they are animalistic. This can be used to prove football hooliganism because they are in conflicting goals and therefore they are fighting like animals in order to receive the prize of a football victory. In conclusion, I think that the use of Social Psychology can be used to understand and, more importantly, prevent football hooliganism. This is because the Police could use Social Identity Theory to understand what they needed to do in terms of policing the stadium, keeping peace and where to ?shepard? the fans. This could possibly reduce the amount of prejudice and discrimination at a football match, and therefore, using Social Identity Theory, reduce the amount of football hooliganism. However, I believe that football hooliganism isn?t a result of just Social Identity Theory; I think passion for the game, as well as ?over-excitedness? has a part to play too. ...read more.

The title of this essay is 'outline and describe.....' which does not include evaluation. However evaluation is included here and with some good points. Important to remember that there are individual differences in behaviour that can help us understand why some people behave in one way and not others. 4*