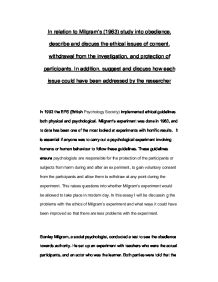 In relation to Milgrams (1963) study into obedience, describe and discuss the ethical issues of consent, withdrawal from the investigation, and protection of participants. In addition, suggest and discuss how each issue could have been addressed b

In relation to Milgram's (1963) study into obedience, describe and discuss the ethical issues of consent, withdrawal from the investigation, and protection of participants. In addition, suggest and discuss how each issue could have been addressed by the researcher In 1993 the BPS (British Psychology Society) implemented ethical guidelines both physical and psychological. Milgram's experiment was done in 1963, and to date has been one of the most looked at experiments with horrific results. It is essential if anyone was to carry out a psychological experiment involving humans or human behaviour to follow these guidelines. These guidelines ensure psychologists are responsible for the protection of the participants or subjects from harm during and after an experiment, to gain voluntary consent from the participants and allow them to withdraw at any point during the experiment. This raises questions into whether Milgram's experiment would be allowed to take place in modern day. In this essay I will be discussing the problems with the ethics of Milgram's experiment and what ways it could have been improved so that there are less problems with the experiment. Stanley Milgram, a social psychologist, conducted a test to see the obedience towards authority. He set up an experiment with teachers who were the actual participants, and an actor who was the learner. ...read more.

When participants heard the screams of the learner, if they decided they did not want to continue, the man in the lab coat (authority) would say to them one of four things. "Please continue," "The experiment requires that you continue," "It is absolutely essential that you continue," "You have no other choice, you must go on" (Milgram, Stanley (1963). "Behavioral Study of Obedience"). Because of these sayings, it gave no right to withdraw. If any of the volunteers felt as if they couldn't continue because they felt that if they were to kill the person they would be held responsible, the examiner would reply "its my responsibility if anything happens to him" (1974, Milgram, cited - Obedience and Civilization, Mixon).. This may have relived a lot of pressure from the volunteers but nevertheless they all showed signs of distress, not being able to cope with having the death or severe injury of another human being on there conscious. I also believe strongly that there was a money issue involved. A lot of people would continue just to get the money they were working for. If they were to stop, there would be an issue of whether they get there money or not. ...read more.

In my opinion I would say the best thing to do would be to still have the authority figure there but ask them if they wanted to continue. That way it gives the participant a chance to leave if the distress is too much for them. Incorporated into this could be the protection of participants. If the participant was shown signs of distress or clear signs of nervousness, the authority figure would ask if they want to continue. This way its stopping the trauma getting worse and participants don't feel obliged to continue. In conclusion, since young everyone has always listened and been obedient to a figure of authority. Whether that means a child to a parent, or a citizen to the law. Our brains are always going to be programmed to abide by authority. When we talk about the Milgram experiment, we forget that these results also surprised Milgram as well as the general public. Because of this, Milgram did not expect the behaviour and distress that was shown in the experiment "When I posed this question to a group of Yale University students, it was predicted that no more than 3 out of 100 participants would deliver the maximum shock. In reality, 65% of the participants in the study delivered the maximum shocks." Miller, Arthur G. (1986). The obedience experiments: A case study of controversy in social science. ...read more.