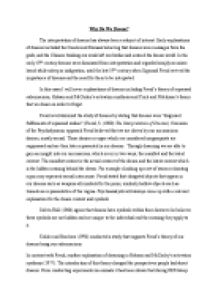 In this essay I will cover explanations of dreams including Freuds theory of repressed subconscious, Hobson and McCarleys activation synthesis and Crick and Mitchisons theory that we dream in order to forget.

﻿Why Do We Dream? The interpretation of dreams has always been a subject of interest. Early explanations of dreams included the Greeks and Romans believing that dreams were messages from the gods, and the Chinese thinking our souls left our bodies and entered the dream world. In the early 19th century dreams were dismissed from interpretation and regarded simply as noises heard while asleep or indigestion, until the late 19th century when Sigmund Freud revived the importance of dreams and the need for them to be interpreted. In this essay I will cover explanations of dreams including Freud?s theory of repressed subconscious, Hobson and McCarley?s activation synthesis and Crick and Mitchison?s theory that we dream in order to forget. Freud revolutionized the study of dreams by stating that dreams were ?disguised fulfilments of repressed wishes? (Freud, S. (1900) The Interpretation of Dreams). Common of the Psychodynamic approach Freud believed that we are driven by our unconscious desires, mostly sexual. ...read more.

As well as the cortex being cut off, there is an inhibition to signals produced by the sensory system. Due to all this activity happening in the brain during REM sleep, we try to interpret the signals and they translate into images. This may explain why we sometimes encounter bizarre features in our dreams. ?The fact that the narrative of a dream, though some bizarre, is at least coherent must surely reflect interpretive processes, at higher levels of the brain trying to impose order or plausibility on the chaos of activity in the sensory area of the cortex? (Blakemore 1988). A reason for why we try to interpret these signals could be illusory pattern perception. This means the identification of a structured and meaningful relationship between a set of random or unrelated stimulus. (Shermer, M. (2010) Scientific American Mind Magazine). This could explain why we try to interpret the random signals given off by parts of the brain. ...read more.

It involved asking college students to select a problem to try and solve in a dream. It was found that half of students had dreamt about their problem and one quarter had even solved it through dreaming. There are many different theories regarding why we dream. Despite Freud?s theory being dated back to the 1900?s it is still considered one of the most dominant theories of explaining why we dream. The major criticism with dream theories is that they are unfalsifiable as there is no one way yet discovered on how we can explain or interpret dreaming. Hobson and McCarley?s activation synthesis (1977) theory and Crick and Mitchison (1983) theory of dreaming to forget are based on scientific research, unlike Freud?s work. In today?s society we are more accepting of theories or ideas which have scientific backing to them. In conclusion, all the theories that are presented in this essay have some grounds for truth, however due to the nature of the topic it is difficult to distinguish the theories which give the best explanation of dreaming since no theory can be proven or disproven. ...read more.