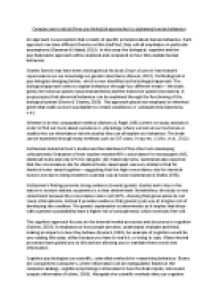 In this essay the biological, cognitive and the psychodynamic approach will be explored and compared on how they explain human behaviour.

Transfer-Encoding: chunked ﻿Compare and contrast three psychological approaches to explaining human behaviour An approach is a perception that consists of specific principles about human behaviour. Each approach can have different theories within itself but, they will all emphasise on particular assumptions (Glassman & Hadad, 2013). In this essay the biological, cognitive and the psychodynamic approach will be explored and compared on how they explain human behaviour. Charles Darwin may have been a biologist but his book Origin of species had massive repercussions on our knowledge on genetic inheritance (Darwin, 2013). His finding led to psychologists divulging further, which is now identified as the biological approach. The biological approach seeks to explain behaviour through four different means ? the brain, genes, the nervous system (neurotransmitters) and the endocrine system (hormones). It prepossesses that abnormal behaviour can be explained through the functioning of the biological system (Dwyer & Charles, 2003). This approach places key emphasis on inherited genes that make us more susceptible to certain conditions i.e. schizophrenia (Sammons, n.d.). Whether it be the comparative method (Harvery & Pagel, 1991) where we study animals in order to find out more about ourselves or, physiology where we look at our hormones or studies into our inheritance via twin studies they can all explain our behaviour. ...read more.

Freud?s method to treat patients is known as psychoanalysis which works on the idea that when memories are too powerful for the conscious mind they become repressed. They become stored in the unconscious, where they are not available by our immediate consciousness. Thus, making the unconscious silently influence our behaviour. The disagreements between our unconscious and conscious thoughts create conflict within ourselves known as psychic tension. The only way to release psychic tension is allowing repressed memories into the consciousness through psychoanalysis (Ward, 2014). During therapy, a therapist will act as a mediator, allowing the thoughts in our unconscious come to the surface through dream analysis (Sharpe, 1988) or Freudian slips (Freud, 2012). A case study which influenced Freud was The Case of Anna O. Dr Breuer worked with ?Anna? who experienced hysteria. During psychoanalysis, it became clear that she had acquired a phobia of drinking after a dog sipped from her glass. Other symptoms started when looking after her father. During discussions, it became apparent that she was suffering from anxiety towards the illness. Once these unconscious thoughts became conscious her paralysis stopped. (Cherry, 2017) The key limitation to this study is that it is not scientific therefore, it cannot be generalised. ...read more.