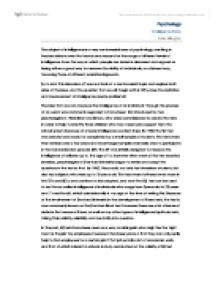 The subject of intelligence is a very controversial area of psychology, resulting in heated debate over the factors and reasons for the range of different levels of intelligence. Even the way in which people are tested is discussed and argued as being either a good way to measure the ability of individuals, or a biased way, favouring those of different social backgrounds. So to start this discussion off we must look at a controversial topic and explore both sides of the issue, and the question that we will begin with is: Why does the definition and measurement of intelligence create problems? The idea that we can measure the intelligence of an individual through the process of an exam was commonly regarded to have been first introduced by two psychologists in 1904, Binet and Simon, who were commissioned to create the tests in order to help to identify those children who may need extra support from the school system because of a lower intelligence quotient (I.Q.). By 1905 the first test was created and ready for completion by a small sample of students. The tests were then revised over a few years and much larger samples were selected to participate in the standardization process (SP). The SP was initially designed to measure the intelligence of children up to the age of 16, however when news of the test reached America, psychologists at Stanford University began to revise and adapt the questions in the test so ...read more.

It is not just the validity that is questionable about IQ tests, as the reliability must also be taken into consideration. For example, some IQ tests are timed in order to test the speed at which a person can look at and solve a problem, however, this begs the question, can the inability to complete a test in time affect a person's IQ? And what if it is a physical, rather than psychological problem which hinders a person's test speed? The elderly for instance may be suffering from age related problems such as arthritis, or heart problems, which generally slow the movement of an individual down, but does not necessarily affect the mind, but if they were asked to take a timed IQ test, they might not get a result which reflects their intellectual ability. Another area of disapproval over IQ tests is the culture-fair testing debate, which takes into account the types of questions that are put into the tests. Any verbal style questions, even if they are translated into different languages tend to be culturally biased and so the best way to remedy this situation is to create questions which use shapes and self explanatory style tasks, however even they will sometimes favour one type of culture over another, and it is virtually impossible to create a totally culture-free test. The next area of criticism is the famous nature debate that runs alongside almost every area of psychology, and which always has strong support from both sides, and the idea of stability of intelligence in particular. ...read more.

The test that Jenson gave to the Black and White subjects in 1969 was no doubt culturally biased towards the white subjects, due to the levels of prosperity and education that each group were subjected to previously. Further studies have shown that Black children who were adopted by prosperous white families, and were subjected to the same level of schooling demonstrated improved levels of intelligence over children who had a similar genetic background. Adoption studies like these have often proven to be strong evidence for the nurture side of the debate; however one final area of concern in the nature/nurture debate is the topic of eugenics. Eugenics is the idea created by Sir Francis Galton (1822-1911), who was interested in the success of English dog breeders, who bred the strongest and best dogs together, and created many different varieties. He decided to start a movement which looked at the possibility of weeding out the bad individuals from the 'good stock' by getting humans to breed with those who have good properties and attributes, a fairly sick proposition even for the 19th century, and it was soon shut down because people decided to breed for love rather than genes. But nonetheless the term eugenics was created, and perhaps the most relevant example of eugenics in history is the Immigration Restrictions Act (1924) which was passed in America by President Coolidge, who was said to have proclaimed 'America must be kept American' as he signed the bill. On that day eugenicists are known to have won one of the greatest scientific racist battles in American history. ...read more.