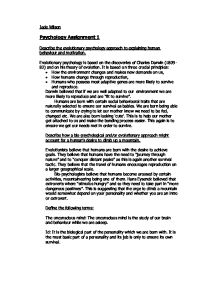 Evolutionary psychology is based on the discoveries of Charles Darwin (1809-82) and on his theory of evolution. It is based on three crucial principles:

Darwin believed that if we are well adapted to our environment we are more likely to reproduce and are “fit to survive”.

Humans are born with certain social behavioural traits that are naturally selected to ensure our survival as babies. We are born being able to communicate by crying to let our mother know we need to be fed, changed etc. We are also born looking ‘cute’. This is to help our mother get attached to us and make the bonding process easier. This again is to ensure we get our needs met in order to survive.

Describe how a bio-psychological and/or evolutionary approach might account for a human’s desire to climb up a mountain.

Bio-psychologists believe that humans become aroused by certain activities, mountaineering being one of them. Hans Eysenck believed that extroverts where “stimulus hungry” and so they need to take part in “more dangerous pastimes”. This is suggesting that the urge to climb a mountain would somewhat depend on your personality and whether you are an intro or extrovert.

Id: It is the biological part of the personality which we are born with. It is the most basic part of a personality and its job is only to ensure its own survival.

Ego: The term Ego is used to describe the more rational, reality-orientated and executive aspects of the personality, and once again is partly conscious and partly unconscious. The Ego’s task, as seen by Freud, was to control the more primitive Id impulses and to adapt these to outer reality in accordance with the reality principle, as well as to mollify the requirements of the Superego: “the poor ego…serves three masters and does what it can to bring their claims and demands into harmony with one another….It’s three tyrannical masters are the external world, the superego and the id” (Freud 1933)

Superego: The superego develops from about 3 years old. It has two subparts. The first is the conscience which tells us what we shouldn’t do. The second is the ego ideal which tells us what we should do. Some effects of the functioning of the superego are descriptively conscious whereas others are descriptively unconscious. For example some individuals may be quite clear that what they wish to do goes against accepted values or indeed against their own upbringing; in others there is an unconscious sense of guilt.

Defence mechanisms: The ego makes use of various procedures to avoid danger and anxiety.

Describe how Sigmund Freud explains the development of the human personality.

According to Freud the human mind comprises of three different parts called the tri-partile structure of personality. The Id, Ego and Superego. He believed that human beings are born very selfish and destined to a life of anxiousness and will never be happy. Freud also believed that the libido developed in individuals by changing its object, a process designed by the concept of sublimation. He argued that humans are born "polymorphously perverse", meaning that any number of objects could be a source of pleasure. He further argued that, as humans develop, they become fixated on different and specific objects through their stages of development—first in the oral stage (exemplified by an infant's pleasure in nursing), then in the anal stage (exemplified by a toddler's pleasure in emptying his or her bowels), then in the phallic stage. Freud argued that children then passed through a stage in which they fixated on the mother as a sexual object (known as the Oedipus Complex) but that the child eventually overcame and repressed this desire because of its taboo nature. (The lesser known Electra complex refers to such a fixation upon the father.) The repressive or dormant latency stage of psychosexual development preceded the sexually mature genital stage of psychosexual development.

Positive reinforcement: Using praise or reward for good behaviour. However there are two types, primary and secondary.

Negative reinforcement: Using threats to enforce that if bad behaviour is committed something unpleasant will be the consequence. It is not punishing bad behaviour as that increases the likelihood of the bad behaviour being repeated.

Humanist psychologists believe human beings are born good and have great potential for good will and fulfilling our self-actualisation. They believe we are corrupted by society. They also believe that we are all individuals and no-one knows us better than we know ourselves. Humanistic psychologists such as Abraham Maslow and Carl Rogers rejected behaviourism and psychoanalysis because they believed we are unique individuals being experts on ourselves. Whereas behaviourists and psychoanalysts theorists believed we are products of our environment. Humanists believed we are born with innate potential. We have good intentions to do things in life whereas behaviourists and psychoanalysis theorists (Freud in particular) believed in the negative side of the human condition.

Behaviourists use experiments as a method of research. Explain how an experiment is conducted using following terms:

Explain why humanistic psychology has been described as the ‘third force in psychology’.

2.  Human beings have in them a uniquely human context.

3. Human consciousness includes an awareness of oneself in the context of other people.

4.Human beings have choices and responsibilities.

5.Human beings are intentional, they seek meaning, value and creativity.

The humanistic approach has its roots in existentialist thought (see Kierkegaard, Nietzsche, Heidegger, and Sartre). It is also sometimes understood within the concept of the three different forces of psychology; behaviorism, psychoanalysis and humanism. Psychologists, including Abraham Maslow, Carl Rogers, and Clark Moustakas, were interested in founding a professional association dedicated to a psychology that focused on uniquely human issues, such as the self, self-actualization, health, hope, love, creativity, nature, being, becoming, individuality, and meaning- in short, the understanding of what it means to be human.

Explain why Milgram’s findings from his studies on obedience seriously question the widely held belief that ‘I wouldn’t obey orders if that meant harming another human being’.

Milgram’s study seriously questions this statement because it shows that the majority of people would in fact harm others if told by a member of authority to do so. After a while one particular volunteer who had to shock the others expressed he were uncomfortable in doing so but the scientist in charge of the experiment urged him and put pressure on him to continue and so he did. The volunteer then asked the scientist if he was willing to take the blame and then continues once he was sure he was free of all moral responsibility. The volunteers could pull out of the experiment at any time and still get paid but as the experiment progressed they had a graduated commitment which would have made it more difficult. Also because the experiment took place in a university which is a socially obedient environment the volunteers thought what they were doing couldn’t be wrong or immoral. The scientist wore a white lab coat which I think also had an affect on the volunteers as we tend to see uniform as authority and so would feel less comfortable not willing to obey.

Describe the differences in how cognitive psychologists and psychoanalysts might explain why boys and girls have a clear idea of their gender roles from and early age.

Cognitive psychologists believe that children require their gender role like any other cognitive skills and are part of cognitive process. They believe that there are 3 stages to this process:

Basic gender identity develops from about 3 years old. Children know what sex they are and how a man/woman’s looks differ from one another and the difference in behaviour but don’t yet know the relevance or that our sex is fixed for life. Knowing their own sex will encourage interaction with same sex children as they have something in common and can identify with them. Playing with other same sex children helps develop the schema for girls or boys. Gender stability is when children realise their sex is permanent. It is achieved by mixing with the same sex and they will start asking questions about the roles of the two sexes. However they still use physical looks to identify sexes so they may think a man with long hair is a woman etc. Gender consistency develops from around 6-7 years old. It’s when we realise what it is to ‘be’ a girl or boy. Children can clearly identify between a man and a woman. We also now conserve gender identity.

Freud was a psychoanalyst and he believed that children learn appropriate gender role behaviour by identifying with their same sex parent. Freud believed at about 3 years old boys fall in love with their mother and so feel threatened by the dad and to stop being castrated he tries to act more like his father. This is called the ‘oedipal complex’. The ‘electra complex’ is the same but for girls. Freud believes girls fall in love with their dads so they try to be more like their mother. He assumed that the psychosexual world looked roughly similar to little girls, who therefore love their fathers and wish to replace their mothers, and, lacking the essential organ or power and significance, feel castrated and therefore powerless. Freud saw the Oedipus complex as a necessary development task to be undergone, or ‘resolved’, for the boy by identification with the feared father which offers him the promise of true potency in the future, in the little girl by identification with the mother and by the promise that her lack of the phallus will eventually be compensated by the capacity to attract and so ‘have’ a man (since she cannot ‘be’ one).