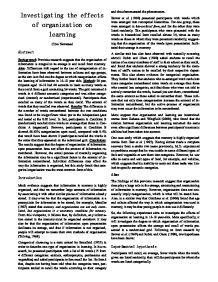 Investigating the effects of organisation on learning

Also interesting was the distribution of recalls by category: colours were recalled the most frequently (85/120), compared with sports and animals (both 77/120) and, least frequently, countries (64/120). There could be several explanations for this, but it appears to constitute primarily of two factors: the frequency of usage, and the size of the categories' domains. For example, colours are frequently used words and there are relatively few words that fall under that category; sports and animals are also categories from which often-used words are drawn, but there are many more words that fit into them than there are for colours; and countries are less frequently-used words. Therefore, a decrease in common usage and an increase in size may lead to proactive interference, causing more confusion and, occasionally, incorrect words to be recalled. This is demonstrated, for example, in that the word America was recalled three times despite it not being on any of the lists (see Appendix 1). In the results from Condition B, there is also evidence that primacy and recency may have occurred. Respectively, green and dog are the first and last words on the grid, and they were recalled by 10 and 9, respectively, of the 10 participants in that condition. No such effect was found, however, in Condition A, suggesting that the order in which words are sequenced has little effect if there is a more significant method of organisation present (in this case, categories). These patterns indicate that organisation is the key factor in remembering information, but at any one time there may be several methods of organisation occurring simultaneously, such as the words' semantic categories, the order that the words are written down, and the frequency of the words' usage, among others. This study did, however, have limitations; the most prominent of which is the potential lack of population validity as a result of the relatively small sample size used and the highly restricted age group from which participants were drawn. ...read more.