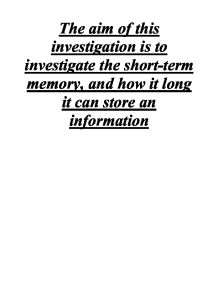 The aim of this investigation is to investigate the short-term memory, and how it long it can store an information CONTENT PAGE CONTENT PAGE Abstract page 3 Introduction page 4 - 5 Method page 6 - 11 Results page 12 - 13 Discussion page 14 - 16 References page 17 Appendices page 18- 24 Appendix 1 - Average calculations for group 1 page 18 Appendix 2 - Average calculations for group 2 page 19 Appendix 3 - Briefing/Consent form page 20 - 21 Appendix 4 - Word list page 22 Appendix 5 - Scoring sheets page 23 Appendix 6 - Debriefing sheet page 24 ABSTRACT Short-term memory was investigated and how information was encoded or placed into our memories. The Atkinson & Shiffrin 1968 multi-store model proposed the idea which compared mental processes of humans to that of computer operations. It was described that there were many stages, one of which was the short-term memory. The processes of attention and rehearsal controlled the flow of information between these stages. Atkinson & Shiffrin said that a distraction here would cause forgetting or prevent rehearsal. The Independent Variable (IV) in the experiment was the distraction added in the form of music for 1 minute. The Dependant Variable (DV) in the experiment was the number of words recalled. Target population was students of 17 years of age from Brinsworth Sixth Form. A field experiment was conducted. The mean average recorded for group 1 (with no distraction) was 8.5 which when compared to the mean of group 2 (with and added distraction in form of music) being 7 shows that group performed better in the recall test. Here it was found they recalled more words on average than group 2. It was concluded that the music distraction did have an effect on group 2's recall results as it was found they performed worse when compared to group 1's results where the distraction was absent. ...read more.

However the investigation being carried out now is also going to include a distraction to test if it has an effect on the recall. The study carried out by Conrad also supports the theory of short-term memory being based on a phonological code. For this study, the results showed that group 1 (without the added distraction), performed better than group 2 (with the distraction in form of music). This supports the fact that a distraction affects the recall because the brain is taking away the information (which is the list of words) from the sensory memory and replacing it with the music, this in turn, makes it difficult for participants in group 2 to remember more words than participants in group 1. The memory topic was investigated, because memory is part of our everyday life. And it can explain in a way why we forget some information given to us. Your contribution to this study is therefore very valuable and very much appreciated. Because it has shown that if more rehearsal time was given to participants (in both groups), then the recall result would be higher (especially in group 2). If you would like to read an article on this general topic, then please see: Pennington, D (2000) 'Introducing Psychology', Hodder Arnold, Oxon. If, for whatever reason, you later decide that you no longer want your responses to be part of this study, then please contact Abi Lugboso (at Brinsworth sixth form, Rotherham) to have your data removed from the study and destroyed. As a final point, all data collected in this study will be analysed in an aggregated form - your responses will not be singled out; only averaged results will be reported in any future publications. You will remain anonymous. Thank you again for participating and helping with this study. However, please do not show this debriefing sheet or discuss any aspect of the study with other students. In order for this study to work, it is important that future participants do not have this information or any particular expectations. Thanks! Abi Lugboso (Investigator) ?? ?? ?? ?? 2 ...read more.