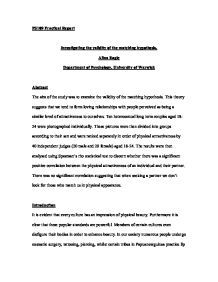 Investigating the validity of the matching hypothesis.

PS109 Practical Report Investigating the validity of the matching hypothesis. Alina Eagle Department of Psychology, University of Warwick Abstract The aim of the study was to examine the validity of the matching hypothesis. This theory suggests that we tend to form loving relationships with people perceived as being a similar level of attractiveness to ourselves. Ten heterosexual long term couples aged 18-24 were photographed individually. These pictures were then divided into groups according to their sex and were ranked separately in order of physical attractiveness by 40 independent judges (20 male and 20 female) aged 18-24. The results were then analysed using Speaman's rho statistical test to discern whether there was a significant positive correlation between the physical attractiveness of an individual and their partner. There was no significant correlation suggesting that when seeking a partner we don't look for those who match us in physical appearance. Introduction It is evident that every culture has an impression of physical beauty. Furthermore it is clear that these popular standards are powerful. Members of certain cultures even disfigure their bodies in order to enhance beauty. In our society numerous people undergo cosmetic surgery, tattooing, piercing, whilst certain tribes in Papuanewguinea practice lip and neck stretching. But why do people go to such extremes? Why is appearance so important? ...read more.

"Our study is investigating the theory that when seeking a partner we tend to go for those that match us in terms of physical attractiveness. The 20 photographs we asked you to rank were 10 long term couples. With your results we are going to see if the rank position you gave for the male of the couple is the same as the rank position you gave to the female. If so then it seems our hypothesis is correct. Thank you for you participation. If you wish to get in contact with any of us feel free to." (We then handed over our email address.) Once the data set was complete, the results were correlated and analysed using Spearman's Rho statistical analysis. Results Raw data is avalible in appendix D Spearman's rho Male Rank Correlation Coefficient 1.000 .297 Sig. (2-tailed) . .405 N 10 10 Female Rank Correlation Coefficient .297 1.000 Sig. (2-tailed) .405 . N 10 10 Table 1: The correlation coefficient of similar attractiveness in long term couples There appears to be no significant correlation between the mean average attractiveness ranking of the males and females involved in interpersonal relationships. Figure 1. Scatterplot of the correlation between mean male and mean female rankings for each couple. The data in Figure 1 shows a general positive relationship between partners physical attractiveness. ...read more.