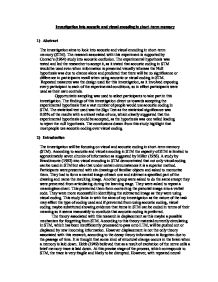 Investigation into acoustic and visual encoding in short-term memory

Investigation into acoustic and visual encoding in short-term memory 1) Abstract The investigation aims to look into acoustic and visual encoding in short-term memory (STM). The research associated with this experiment is supported by Conrad's (1964) study into acoustic confusion. The experimental hypothesis was tested and led the researcher to accept it, as it stated that acoustic coding in STM would be used even when information is presented visually whereas the Null hypothesis was due to chance alone and predicted that there will be no significance or difference in participants recall when using acoustic or visual coding in STM. Repeated measures was the design used for this investigation, as it involved exposing every participant to each of the experimental conditions, so in effect participants were used as their own controls. Opportunistic sampling was used to select participants to take part in this investigation. The findings of this investigation direct us towards accepting the experimental hypothesis that a vast number of people would use acoustic coding in STM. The statistical test used was the Sign Test as the statistical significance was 0.05% of the results with a critical value of one, which clearly suggested that the experimental hypothesis could be accepted, as the hypothesis was one tailed leading to reject the null hypothesis. The conclusions drawn from this study highlight that most people use acoustic coding over visual coding. 2) Introduction The investigation will be focusing on visual and acoustic coding in short-term memory (STM). According to acoustic and visual encoding in STM the capacity of STM is limited to approximately seven chunks of information as suggested by Miller (1956). A study by Brandimonte (1992) into visual encoding in STM demonstrated that not only visual coding can be used in STM but also that under certain circumstances it is a superior method. Participants were presented with six drawings of familiar objects and asked to memorize them. ...read more.

Also as there is less variation between conditions, better statistical tests can be used. Moving on fewer subjects are required as data for all conditions is collected from the same group of participants, and as there will be males and females allocated to each group therefore making it more economical. However to reduce order effects, the researcher will consider counterbalancing. 3.2) Participants The sampling method used in this investigation of visual and acoustic encoding in STM would be opportunistic sampling. This involves the researcher selecting anyone who is available to take part from any given population. This sample might be easily biased or unlikely to be representative of the target population as certain subgroups may not be available for inclusion, however sometimes this is acceptable as research on the capacity of STM reasonably concludes that an opportunity sample of the general public would produce results that did not differ in ways from those obtained from any other kind of sample. The sample will consist of 12 participants. The researcher will possibly control the genders by allocating six participants in one group, but three participants of each gender will be in a group. Inevitably each group of six people will experience both the conditions. The age limit will be controlled, as participants will be selected from a college. 3.3) Apparatus The apparatus used will include acoustically similar and acoustically dissimilar images prepared by the researcher. (In the appendix) As some of the images maybe hard to interpret due to individual differences the words depicting the images will be displayed onto a screen. 3.4 Procedure 3.4.1 Briefing As soon as the participants are led to a typical classroom, the researcher will welcome and debrief the participants about the investigation. This will be conducted in the following manner where the researcher will state: "The aim of this experiment is to investigate the effects of acoustic and visual encoding in STM. ...read more.

This would also be unrepresentative of the population of England and would not apply to everyone. To rectify this, the study can be conducted in each major city of England to represent the population as a whole. Whilst the experiment was taking place, the level of noise in the surroundings was high. This could have led to disturbance and distraction and may have affected the recall of participants. To modify this, the investigation should be conducted in an area where the levels of noise and distraction are not very high, which would lead to fair results. 5.4 Implications and suggestions for further research: Implications that would arise from my results would lead directly to the society. Carrying out an investigation into acoustic and visual encoding in STM may have changed or enhanced people's well-being. This has probably led people to perceive society in a different way. Their perceptions of life or the way people think, forget or remember things may have altered. People with forgetful memories, may benefit from using this form of coding in STM, in order for them to improve on their memory and maybe even practice by doing small tasks. Allocating or sampling people with forgetful memories to take part in an experiment, in order to approve or disapprove this idea, can suggest theories or ideas of further research. The study can also be extended to different age groups, in order to investigate the same effects to suggest further theories or to even different cultures. 6) Conclusion By looking closely at the findings of this investigation, it comes to a conclusion that acoustic coding in STM is the preferred method used to code information even when information is presented visually. This clearly links in to be the aim of my investigation, which explores into the two different codes in STM. Thereby rejecting the null hypothesis which states that there will be no difference or significance in participants recall when using acoustic or visual coding in STM and accepting the experimental hypothesis, which highlights the use of acoustic coding over visual encoding. 7) Appendices ...read more.