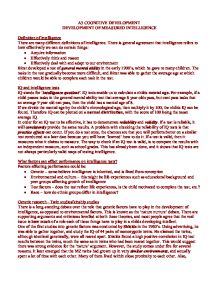 A3 COGNITIVE DEVELOPMENT DEVELOPMENT OF MEASURED INTELLIGENCE Definition of intelligence There are many different definitions of intelligence. There is general agreement that intelligence refers to how effectively we can do certain things: * Acquire information * Effectively think and reason * Effectively deal with and adapt to our environment Binet developed a test of general mental ability in the early 1900's, which he gave to many children. The tasks in the test gradually become more difficult, and Binet was able to gather the average age at which children would be able to complete each task in the test. IQ and intelligence tests IQ stands for 'intelligence quotient'. IQ tests enable us to calculate a childs mental age. For example, if a child passes tasks in the general mental ability test that average 8 year olds pass, but cant pass tasks that an average 9 year old can pass, then the child has a mental age of 8. If we divide the mental age by the child's chronological age, then multiply it by 100, the childs IQ can be found. Therefore IQ can be plotted on a normal distribution, with the score of 100 being the mean average IQ. In order for an IQ test to be effective, it has to demonstrate reliability and validity. ...read more.

Home background, parental involvement, and enrichment programmes are all things that have been studied in relation to intelligence. With regard to home background, the Rochester Longitudinal study observed children from birth to adolescence and found there were 10 factors which could be detrimental to the childs IQ. That is, the more factors present in the childs life, the lower the childs IQ would be. Some of these factors include the mother having a history of mental illness, the mother not going to high school, there being four or more children in the family, and the main earner in the family having a semi-skilled job. The data gathered here is only correlational, and a criticism of the study is that low parental IQ could account for some of the 10 factors. For example, "the mother didn't go to high school" - this may be due to the fact that the mother herself has a low IQ, and therefore the child has inherited his IQ from her. This works against the researchers original conclusion that environmental factors are of greater influence to intelligence! Research into home environment has shown that children who do well in IQ tests are usually from families who are: * emotionally responsive and involved with the child, * provide play materials and opportunities to explore and learn, * who expect their child to learn and achieve. ...read more.

Test factors What factors of an IQ test might cause some children to score less than others? * Culture bias. IQ tests such as the Stanford-Binet are designed to test intelligence in Western cultures. They are culture specific. Some psychologists have attempted to put together culture fair tests, such as the Raven Progression Matrices Test. These tests don't involve any use of language or other culturally specific factors. * Oversimplification. Using IQ as a single measure of intelligence is problematic. The results of IQ tests have been criticised as misleading because they only really test academic abilities (i.e. things the child learns at school), rather than real life abilities. For example, people who are dyslexic perform better on some types of tests than others. This shows that some forms of IQ testing don't take individual differences into account. * Familiarity. Some children are familiar with IQ tests, and because of practice effects, will score better than others that haven't had a chance to practice. * Motivation. The better a child is expected to do, the better he is likely to do. Rosenthal conducted a study where he demonstrated how children who were expected to do well by their teachers, showed large IQ gains over a year. This is known as the self-fulfilling prophecy. The teachers beliefs that the child would do well were realised because of those beliefs. ...read more.